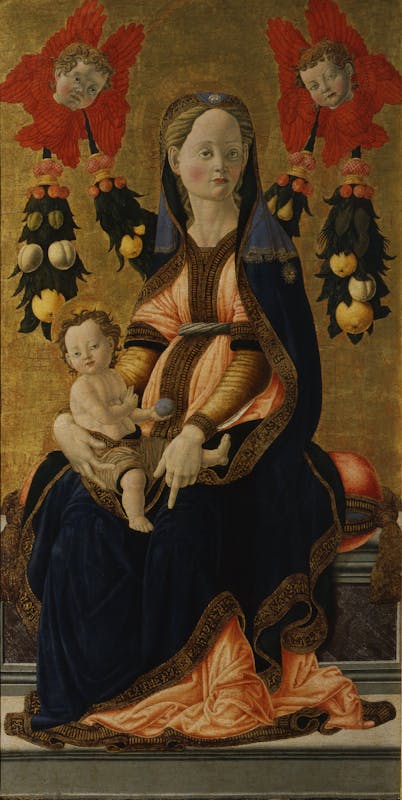 This painting represents the central panel of a triptych that was originally made up of two more panels depicting St. James the Greater (right) and St. Anthony the Abbot (left), no longer in the Contini Bonacossi collection and now in the Pinacoteca Ambrosiana in Milan and the Musée des Beaux-Arts in Lyon respectively.

Initially the panels were attributed to Florentine painter Giovanni di Francesco del Cervelliera by Giovannozzi, but their paternity has been the subject of lengthy discussions by art historians and critics.  More recent studies have brought some clarity with regard to the identity of the artist, and the most accredited theory would seem to split the figure of Giovanni into two artists of the same name: Giovanni di Francesco del Cervelliera and Giovanni di Francesco (Franco) di Piero. The latter, born in 1425-1426 and documented until 1498, is thought to be the artist of the so-called Carrand Triptych, now in the Museo Nazionale del Bargello in Florence, as well as of the work described here.

The Madonna with Child is therefore counted among the later works of Giovanni di Franco, realized between 1454 and 1459, which represent the peak of the activity of this pupil of Andrea del Castagno. The solid composition and monumentality of shapes show evident influences of Castagno, while the expressiveness of the palette, consisting in vivid and enamelled colours, is reminiscent of the Florentine movement known as the “painters of light”, of which Giovanni di Franco was one of the main exponents. The influence of Donatello, Francesco Squarcione and the School of Ferrara from the late 15th century has been recognised in the elegant use of lines and decorative motifs, such as the fruit festoons under the heads of the angels above the holy group.