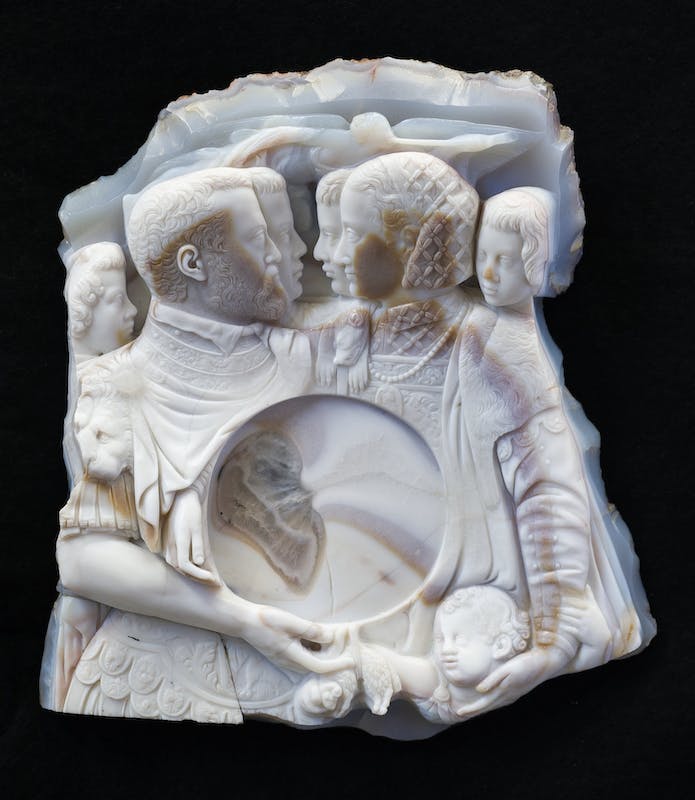 Cameo with portraits of Cosimo I de’ Medici, Eleonor of Toledo, and their children

The “enormous cameo” is mentioned by Giorgio Vasari, who, describing the composition. also mentions Cosimo’s daughters, Isabella (1542 – 1576) and Lucrezia (1545 – 1561), and indicates the presence of a “Fiorenza”, an allegory for the city, in the now empty tondo held by Cosimo and Eleonor. A drawing, now in Christ Church College, Oxford and thought to be the work of Vasari, shows the cameo with the addition of the chain on the collar of the Golden Fleece and two alternative studies, on the right and left, for the final mount of the onyx, in an elegant piece of Mannerist gold jewellery.

This differences between the cameo as it is today, Vasari’s description, the Oxford drawing and the inventory records are not easily explained and have led to the formulation of various hypotheses.  What is known and recorded is that it is the painstaking work of famous Milanese carver, Giovanni Antonio de’ Rossi, in Cosimo’s employ from 1556, and who worked on it in 1559 and again in 1562 after moving to Rome.  The cameo was definitely in Florence in 1562 and just a few years later (1589), it was given a prominent place in the Tribuna, where it was placed opposite the large cameo of Antoninus Pius sacrificing to the goddess Hope (now in the Archaeology Museum in Florence), to symbolize the heights achieved by the artists of the Renaissance compared to the ancients, as well as to draw a comparison between Rome’s judicious, mild emperor and Cosimo, Duke of Florence.