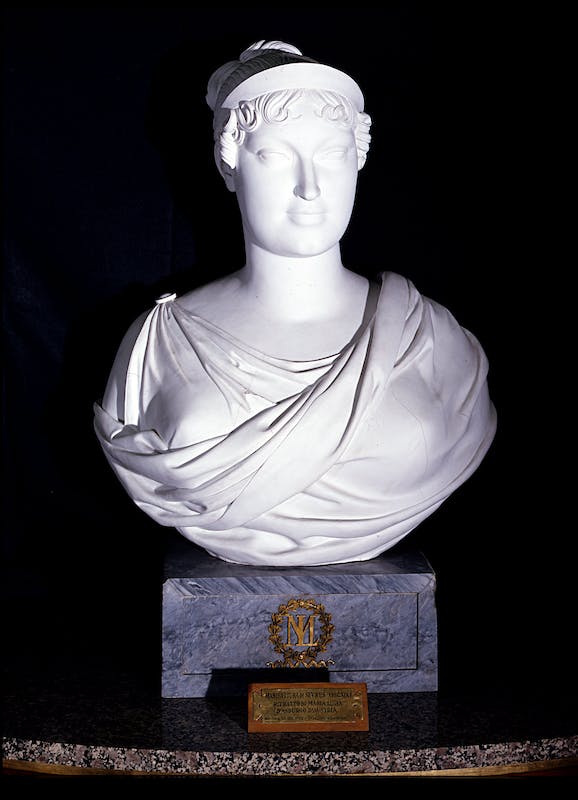 Bust of the Empress Marie Louise

The bust is the faithful biscuit version of the official portrait of Empress Marie Louise, commissioned by her husband Napoleon to sculptor François Joseph Bosio and presented at the Parisian Salon of 1810. That same year, the director of the Manufactory of Sèvres, Alexandre Brogniart, commissioned to Bosio “a plaster bust of Her Imperial Majesty, Empress [...] of dimensions larger than life and arranged in such a way as to form a pendant with the bust of the emperor made by Chaudet”. Two “magnitudes” of this portrait were made in biscuit and the one presented is the larger of the two. The request for the plaster model is essential for obtaining the moulds, also in plaster, needed to convert the bust into porcelain. Additionally, the larger dimensions are due to the volumetric shrinkage of 14-16% undergone by porcelain during the ‘softening’ phase. This occurs during firing when the maximum temperature of 1400°C is reached. Finally, the choice to create a biscuit, that is, a single-fired porcelain piece, is motivated by the visual resemblance of this material with white marble, particularly favoured in neoclassical times and by the satin look of the surface, which favours a better definition of the sculptural details.

Our bust was gifted on 21 June 1811 to Ferdinand III (formerly Grand Duke of Tuscany and at the time Grand Duke of Würzburg) to mark the baptism of his godson, son of Napoleon Bonaparte ‘King of Rome’, as also confirmed by the inscription imprinted in the material. This states the date of execution, 8 March 1811 and the name of the modeller, Augustin Liancé. Liancé appears to have made two busts “of first magnitude” with the portrait of Marie Louise, of which one might be ours and the other could be the one given to the empress at the end of 1810. However, the initials “A B” in the inscription suggest that sculptor Alexandre Brachard may have been the author of these works, since he too was paid in the same year for three busts of Marie Louise, moreover executed on 8 March, although two of these are of “second magnitude”.