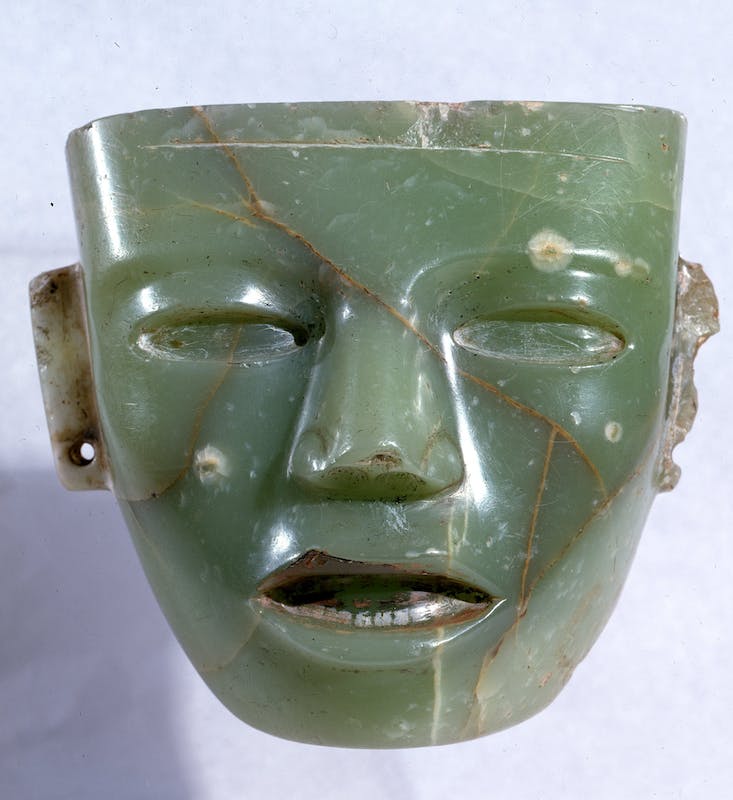 The translucent green travertinite mask comes from Teotihuacan (Mexico) and dates back to the 4th - 6th century A.D. The visual impact when first seen must have been most striking: the sclera of the eyes were white and made out of shell, with irises in black obsidian; the teeth were painted white, the mouth and lips were painted red, with the colors applied directly to the stone; the holes in the ears show that the mask was also given ear adornments.

It is thought that most of these masks - some five hundred and fifty have been identified - were made in the area of Puebla, while in the area of Teotihuacan, known as ‘La Ventilla’, archaeologists have discovered a stone workshop where some masks were probably recycled.

Nothing is known about their purpose; they were certainly not worn and it is likely they were linked to worshipping ancestors or divinities. It is thought that they may have been made to worship the Corn God

An element that makes the Florentine ‘Treasure’ mask unique is the fact that it was brought to Europe so early: the item is described in the inventory of items belonging to Prince Leopoldo de’ Medici, then cardinal, written up on his death (1675). It is unlikely that the mask was dug up from the ruins of Teotihuacan so early, since the first archaeological mission is recorded in 1676, and therefore it has been suggested that it comes from a hoard of other masks, taken in the Aztec period (15th-16th century) and placed as an offer inside the Templo Mayor in Mexico-Tenochtitlan, the modern-day Mexico City.