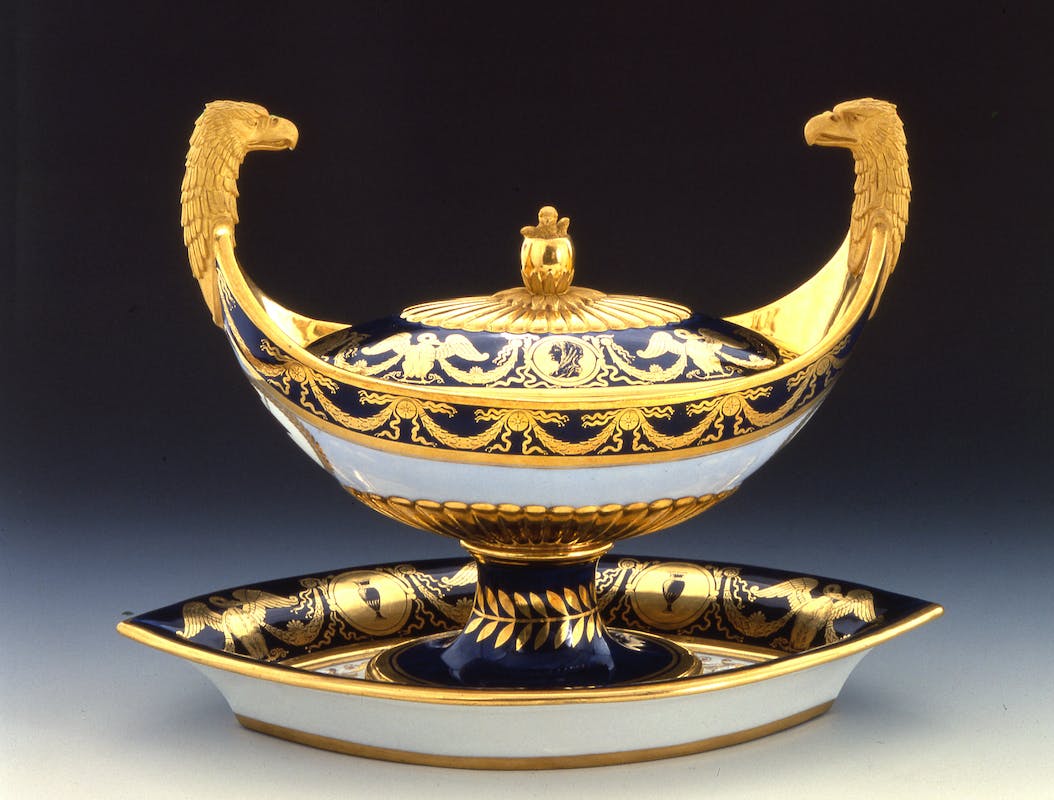 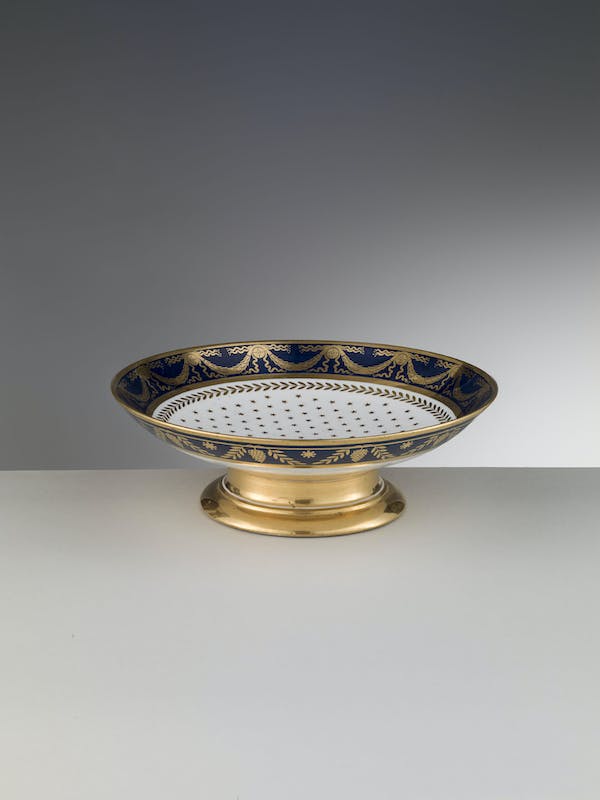 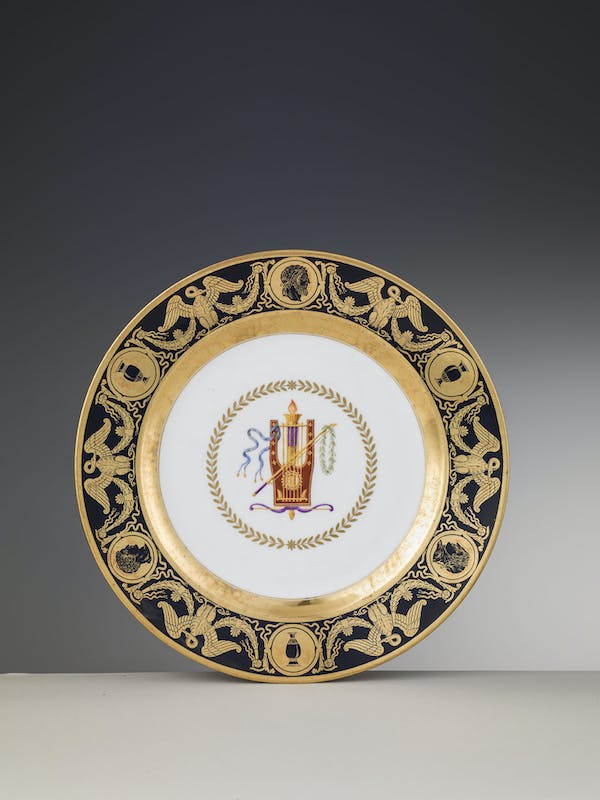 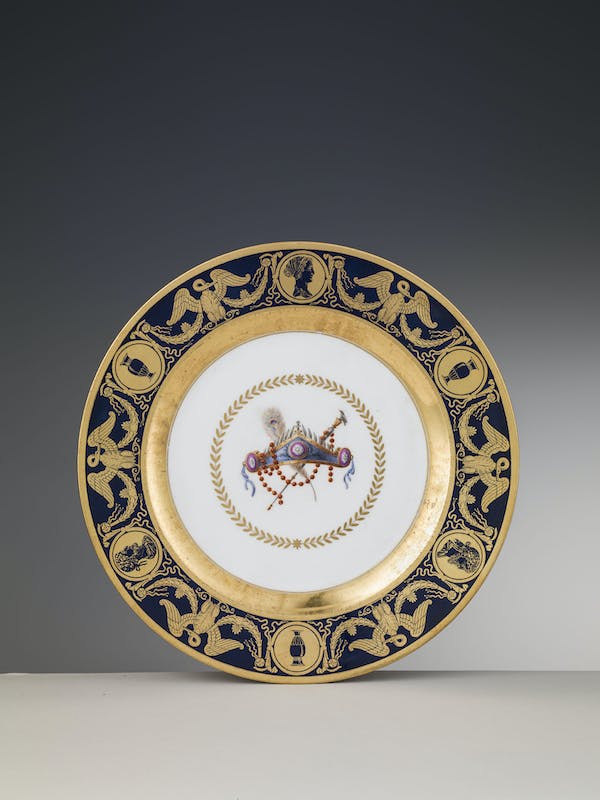 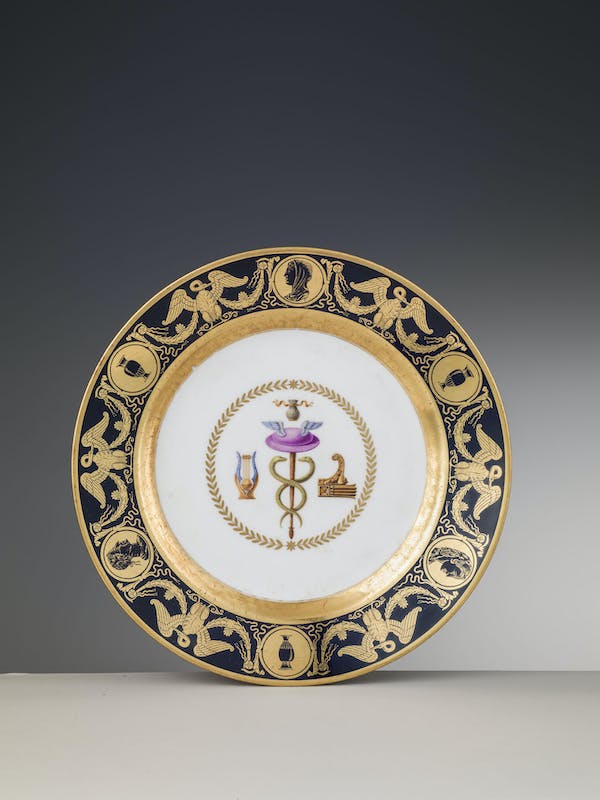 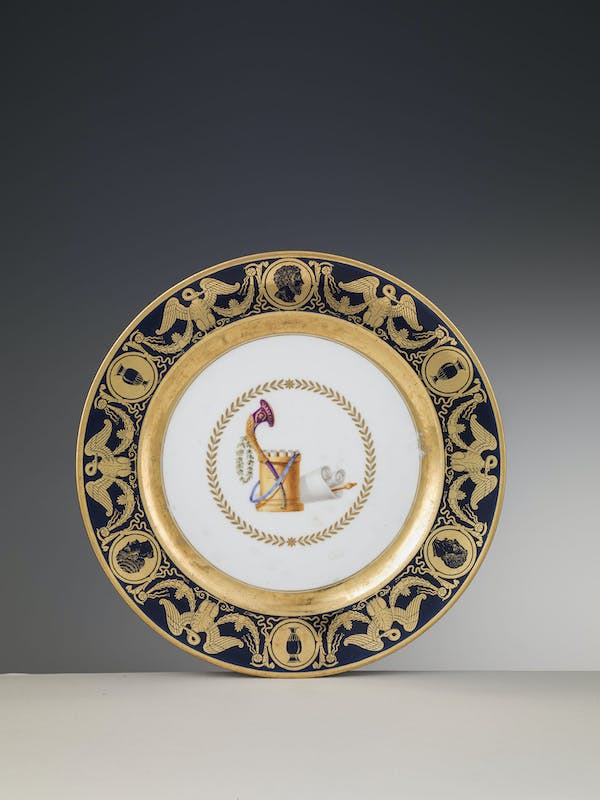 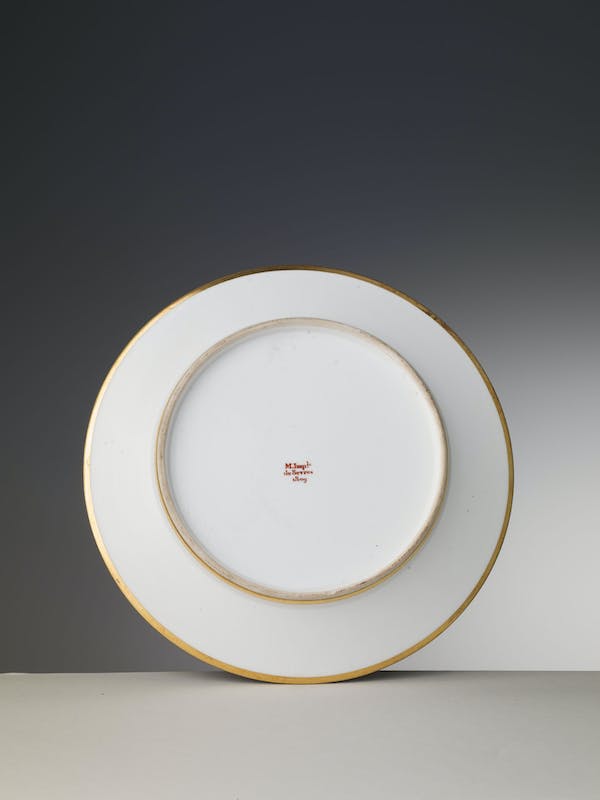 This is a lavish service that expresses the splendour of the French Court in all its glory, with a profusion of gold enhanced by dark blue and the light blue of the base. It was produced by the Manufactory of Sèvres, in line with the style of decor popular in regal dwelling places at that time and the introduction of gold used on large surfaces in the 19th century, a feature that was also widely reiterated in the production of the other European manufactories.

The services is divided in two. One, composed of bowls, a salad bowl, small cups and fruit plates, was destined for the entrèe, whereas the other, with flat plates, compotes, sugar bowls, bowls, ice buckets, ice dishes and fruit plates was used for dessert. The assortments for both types of uses are characterised by various decorative elements developed for Elisa Baciocchi as commissioned by her brother Napoleon I, who gifted the service to her in 1809 when, having become Grand Duchess of Tuscany, she came to live in Palazzo Pitti. Baciocchi was extremely fond of this service, perhaps because of its link to her affection for her brother, and for this reason she took it with her when she left Florence to seek shelter in Lucca in 1814, in the hope that she would keep her title as princess. Instead, she was forced to return it to Palazzo Pitti, where we can still admire it to this day, although now it has a different assortment of bowls and plates, featuring some created by Manifattura Ginori, similarly to the service of the Grand Duke Pietro Leopoldo.

The uniqueness of this “double” service lies in its dual use, and its variety of decorative variants. The entrèe part was used for dishes presented both after the starter or soup and after fish, so it was the third dish served immediately before the meat, while the dessert service, still in use today, was introduced at the end of the meal.

Examining the decorations, the dishes for the entrèe are characterised by golden flowers alternated on a white and dark blue background, while those for the dessert sport much more complicated patterns. The latter feature stylish garlands studded with medallions featuring effigies of antiquarian taste, and swans, chosen by Baciocchi as a symbol. The oddest, or perhaps lesser-known shapes of the dessert service include sugar bowls featuring a small eagle emerging from the egg which serves as the knob on the lid, while two eagle protomes form the handles. The ice buckets with handles shaped like elephants’ heads are very distinctive and provide food for thought as to the meaning of these containers, given the prominent role they play in the service. In fact, after dinner, as well as tastes of sorbet, wine and liqueurs paired by the pastry chefs with the desserts and served cold, usually in refrigerated glasses, were particular favourites. The presence of such a copious amount of ice on the banquet tables was further confirmation of the wealth of the Court or of the lord of the house, given the difficulty of bringing it to the table.