HomeMagazineNews
News | 30/05/2019
New Rooms for the 16th-century painting at the Uffizi
14 new rooms for Venetian and Florentine masters, 105 paintings offering over 1,100 square metre of pure art

Titian's "Venus of Urbino" in a dedicated room; the return of Federico Barocci's monumental "Virgin of the People" to the Gallery after almost ten years of absence; a new room devoted exclusively to the masterpieces of Venetian naturalism and others for Tintoretto's and Veronese's masterworks; and over 30 paintings on display again after an inordinately long time. These are only some of the treasures of great art produced in Florence and Venice in the 16th and early 17th centuries that have now been rehoused in 14 completely renovated rooms on the first floor of the Uffizi hosting 105 works of art, fully one-third of which have been in storage for a considerable period of time. The work has taken roughly a year and has involved a surface area of over 1,100 square metres in the Gallery.

The colours of the walls are natural and have been applied using traditional methods, bringing them vibrantly to life: green for the Venetian school – a green inspired by the drapery and wall hangings seen in countless Venetian Renaissance paintings – while for the Tuscan school we have chosen a dark grey echoing the pietra serena of the Uffizi itself, yet with a warmer, more velvety textural feel to it.

Titian's "Venus of Urbino" hangs next to "Flora", also by Titian, and to Sebastiano del Piombo's "Fornarina". Protected by shatterproof glass ensuring a stable microclimate, these three celebrated ladies can now be admired in a calm and totally focused environment. In neighbouring rooms visitors will also, at long last, be able to rediscover the work of Lorenzo Lotto, Tintoretto and Veronese, much of which has been out of the public eye for quite some time, thus completing the Uffizi's collection of Venetian painting. On the same side of the Gallery we have opened a window overlooking the Arno, offering visitors a breathtaking view of the river and the hills to the south of the city, thus forging a new bond between the Gallery and its urban environment.

The walls of the monumental Hall of the Pillar have been left light-coloured to recall those of a centrally-planned church, because this room hosts the Uffizi's collection of large altarpieces of the Counter-Reformation period. Visitors will finally be able to admire Federico Barocci's "Virgin of the People" after ten years in storage. This large masterpiece by Barocci, who hailed from Urbino, was purchased for the Florentine collections by Grand Duke Pietro Leopoldo for a considerable sum of money. Alongside it hangs Barocci's splendidly atmospheric "Noli Me Tangere", while on a nearby wall we have hung another "Noli Me Tangere" by Lavinia Fontana, a great painter from Bologna: two versions of the same subject, two different cultural approaches juxtaposed. The rooms adjacent to the Room of the Pillar have been arranged to convey the idea of "studioli" chiefly housing smaller paintings: one with religious works, the other with secular (predominantly mythological and allegorical) subjects, all of them visible in detail thanks to special protective glass that allows visitors to draw close enough to inspect every sing;e brushstroke. Another work back on display is Andrea Commodi's important "Fall of the Rebel Angels", a huge bozzetto revealing a dramatic tangle of human anatomy, in which this Florentine painter sought to vie with Michelangelo's work in the Sistine Chapel.

And lastly, there is the area devoted to the Dynasties, where Bronzino's portraits of the Medici (including his celebrated "Eleonora of Toledo and Her Son Giovanni") emerge, jewel-like, against the dark grey ground. The new arrangement of the rooms has been designed to improve the public's visual appreciation and understanding of the paintings thanks, among other things, to new benches installed in the Gallery to allow visitors to pause and meditate before the paintings. Support for this superb and extensive renovation has come from the Friends of the Uffizi Galleries, who have donated $100,000 towards the new "Venus of Urbino" Room, while another $15,000 has been generously donated by Trish Savides, a member of the association, for the restoration of Lorenzo Lotto's "Holy Family". 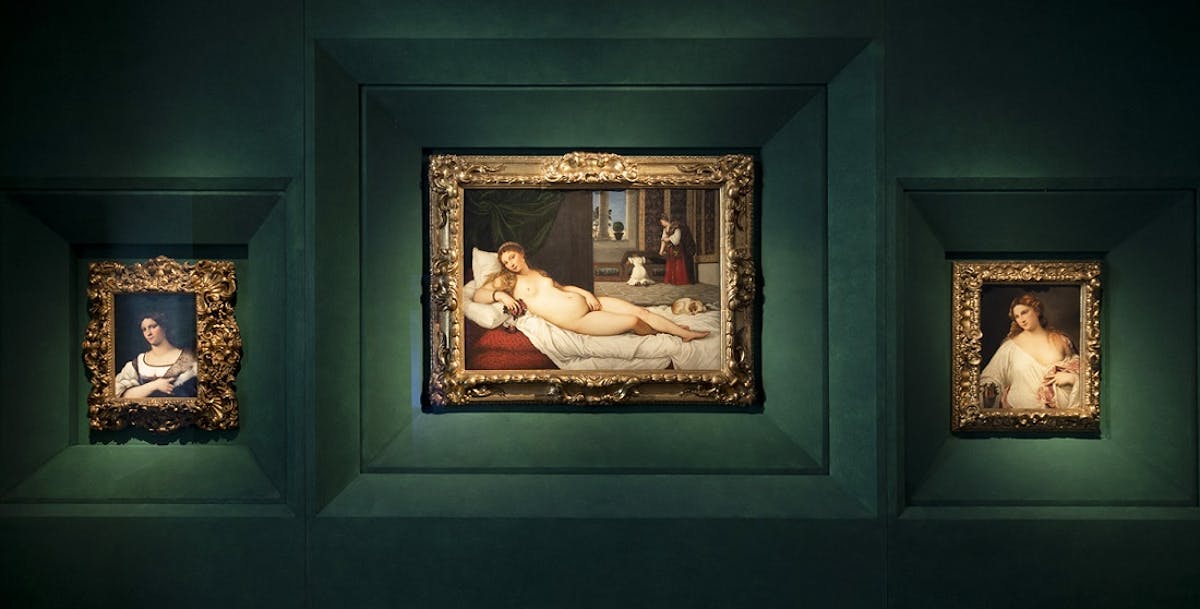 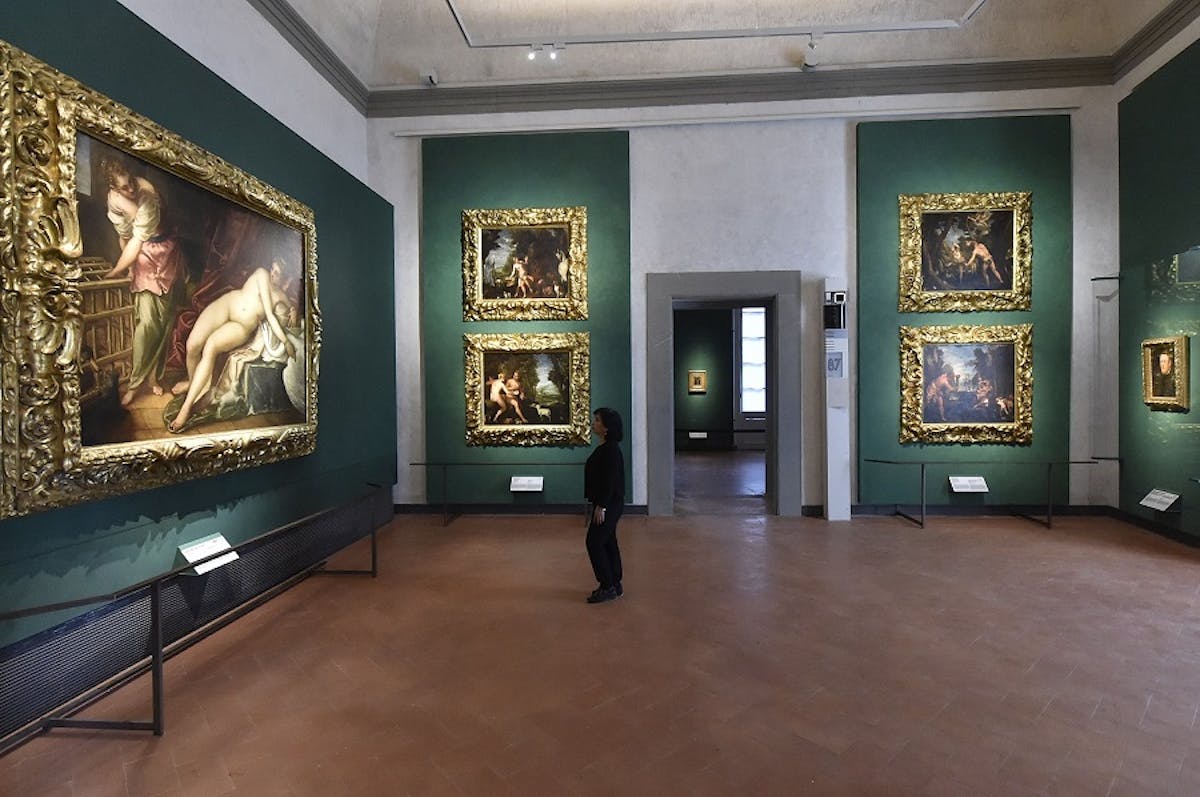 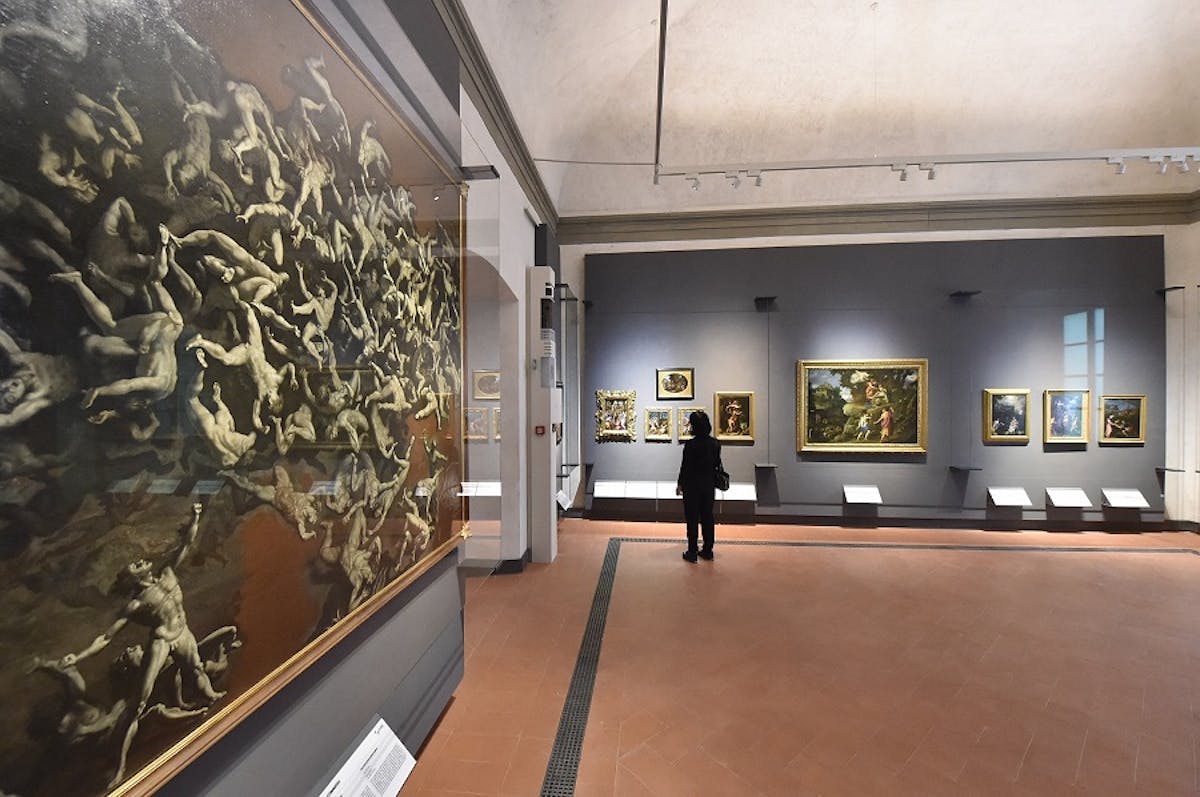 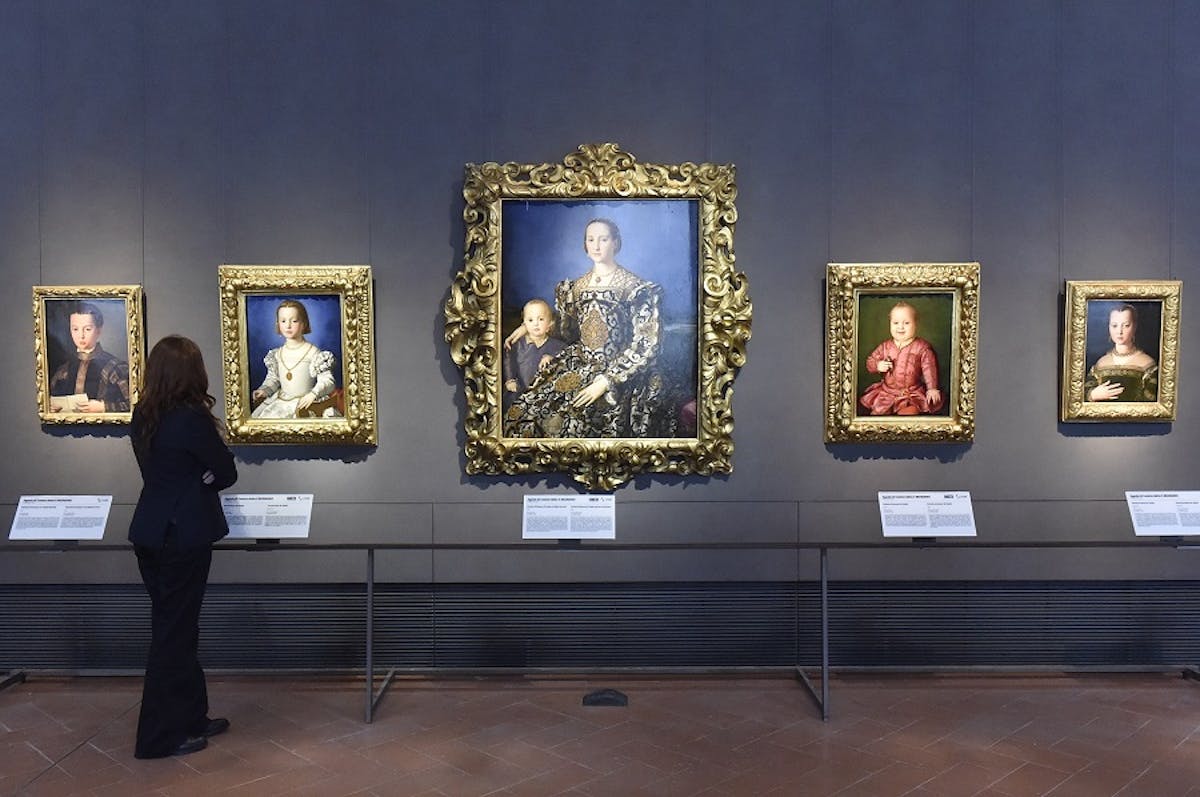 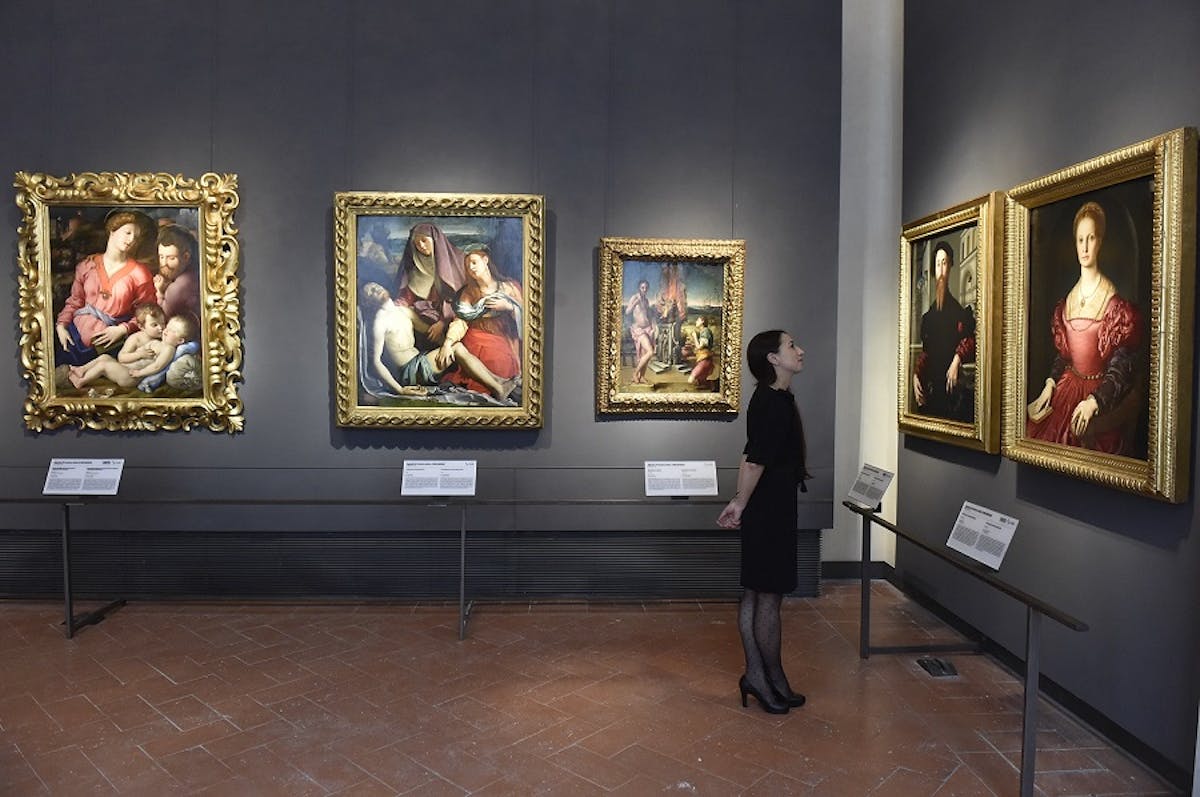 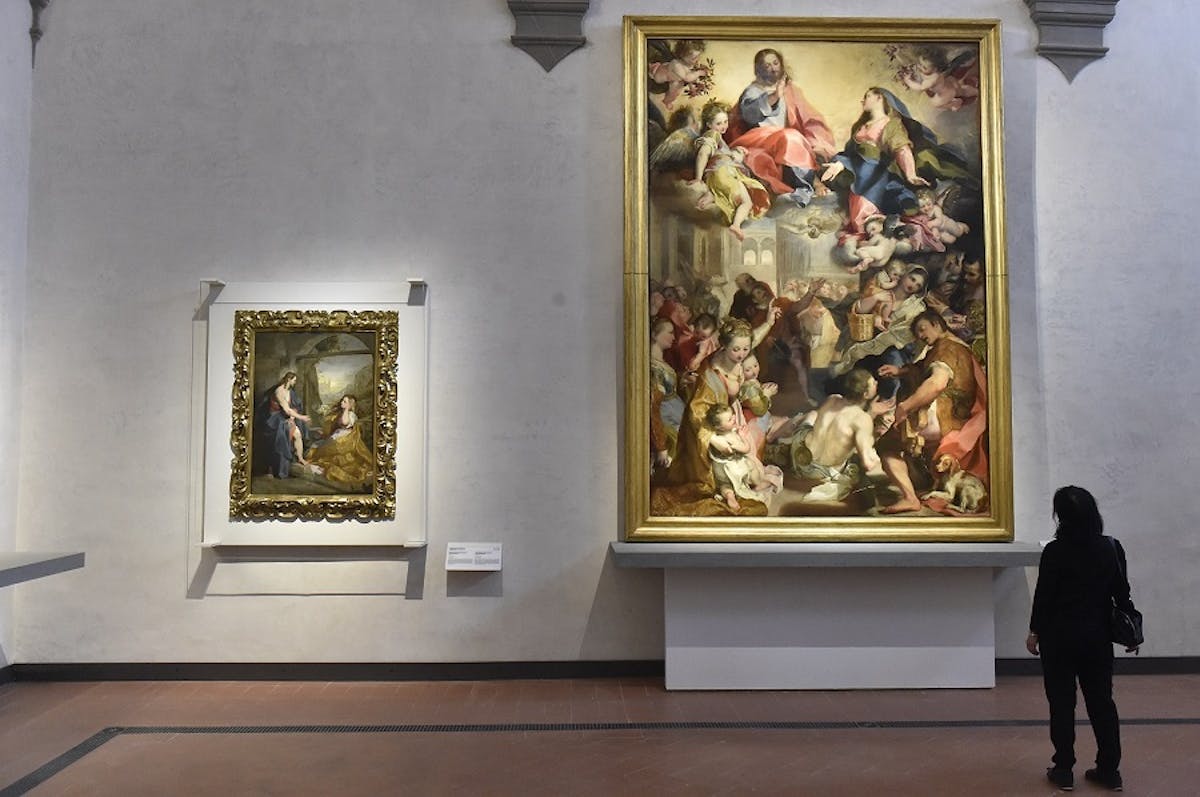 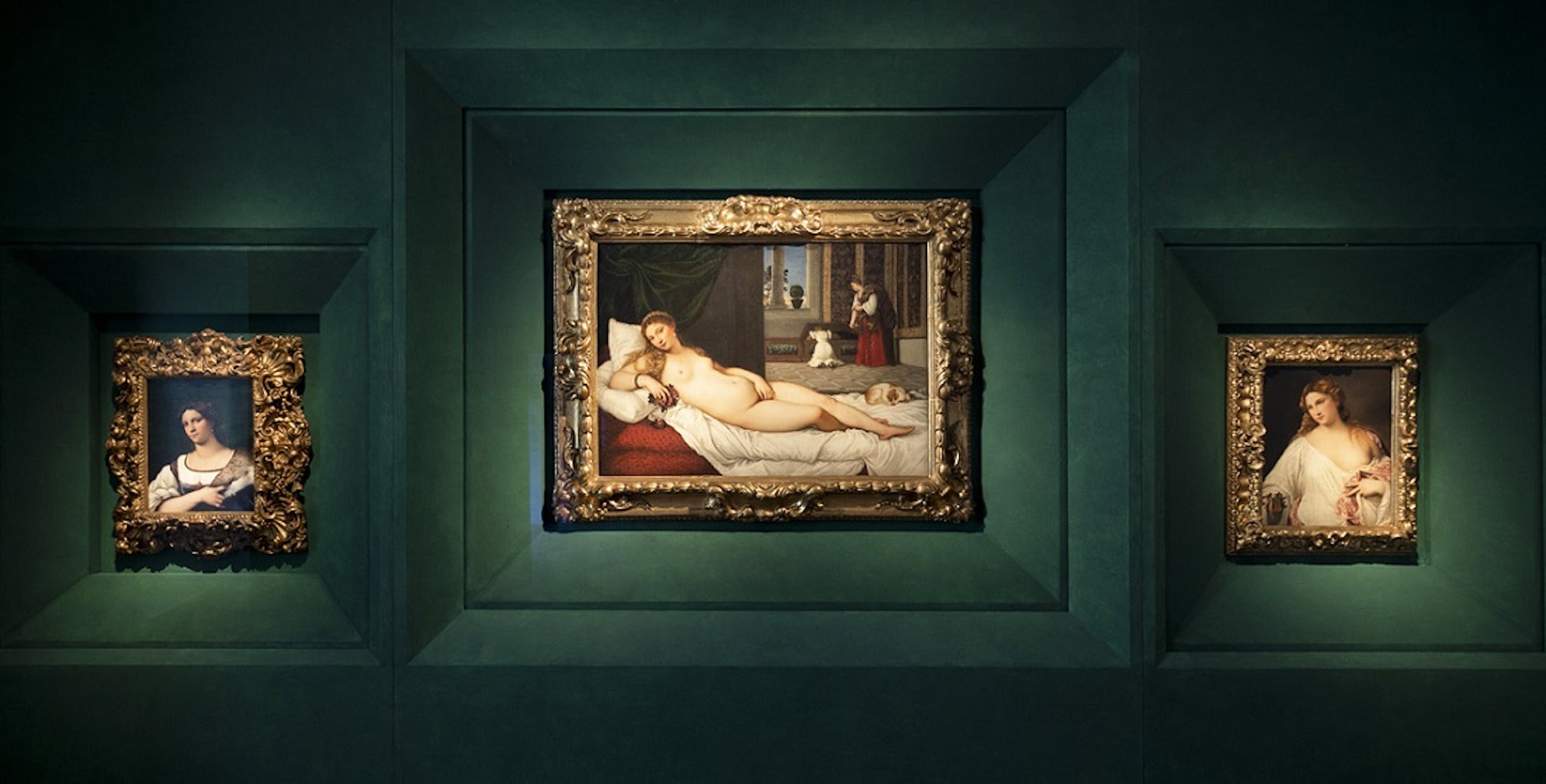 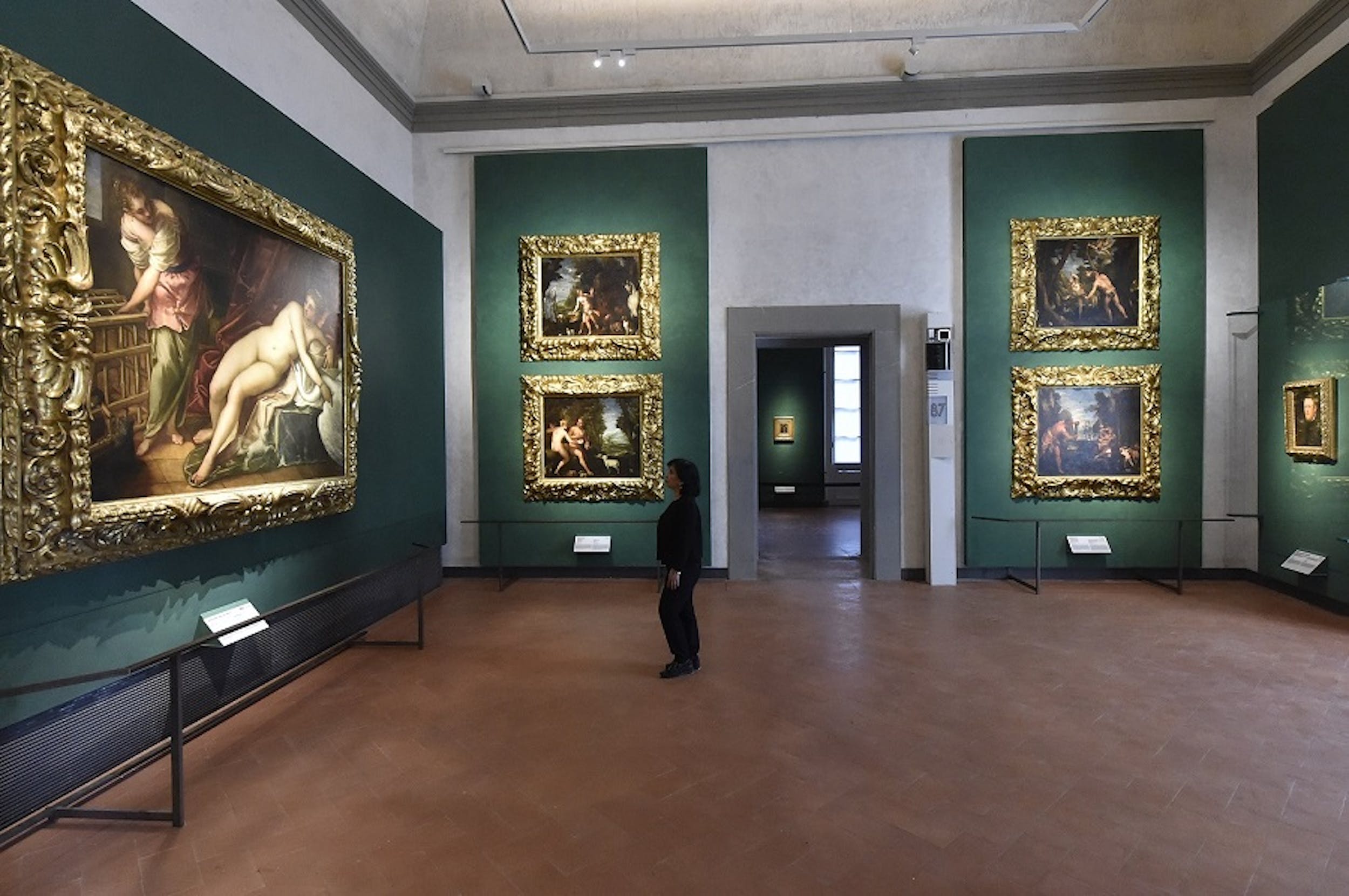 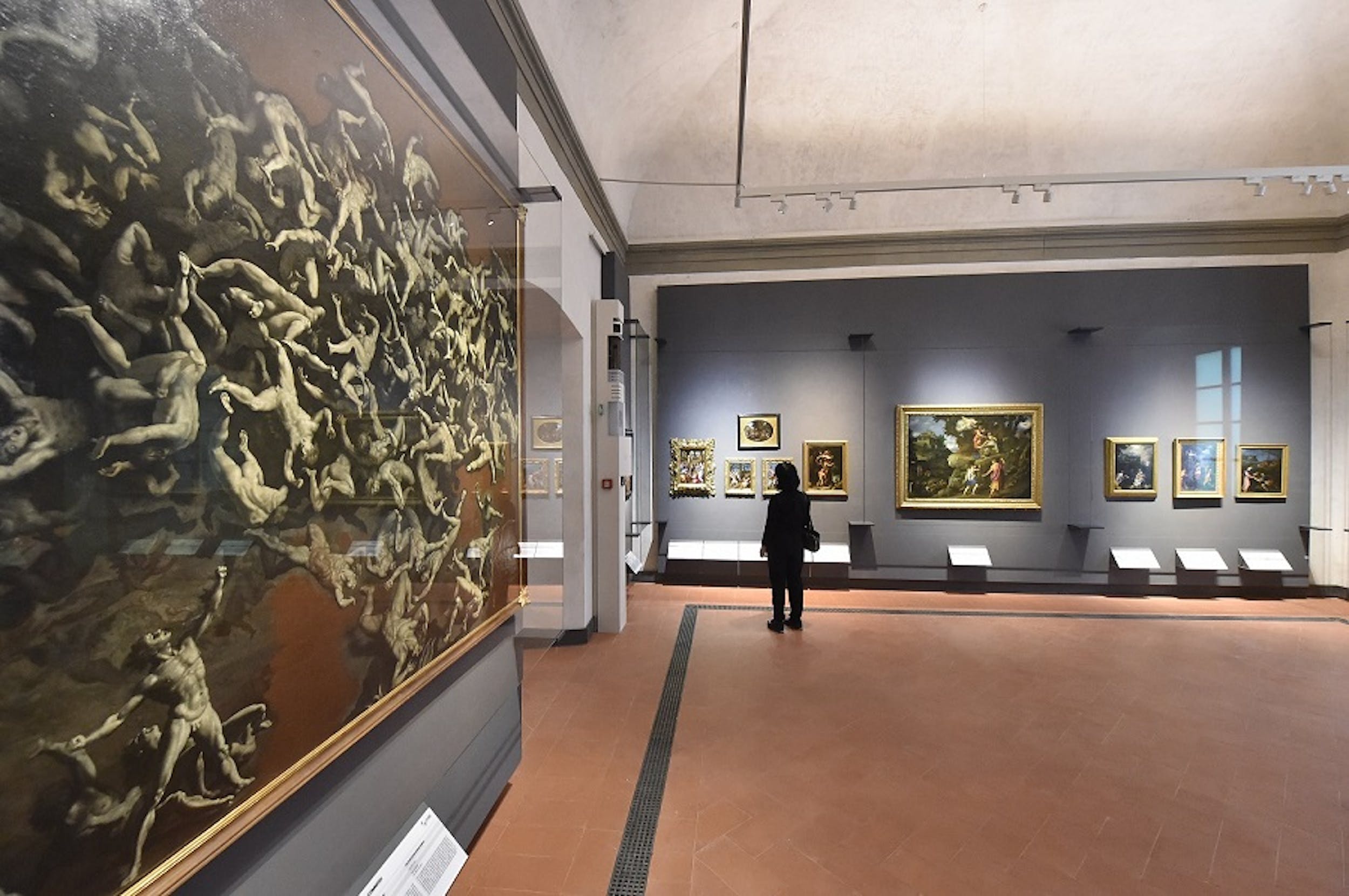 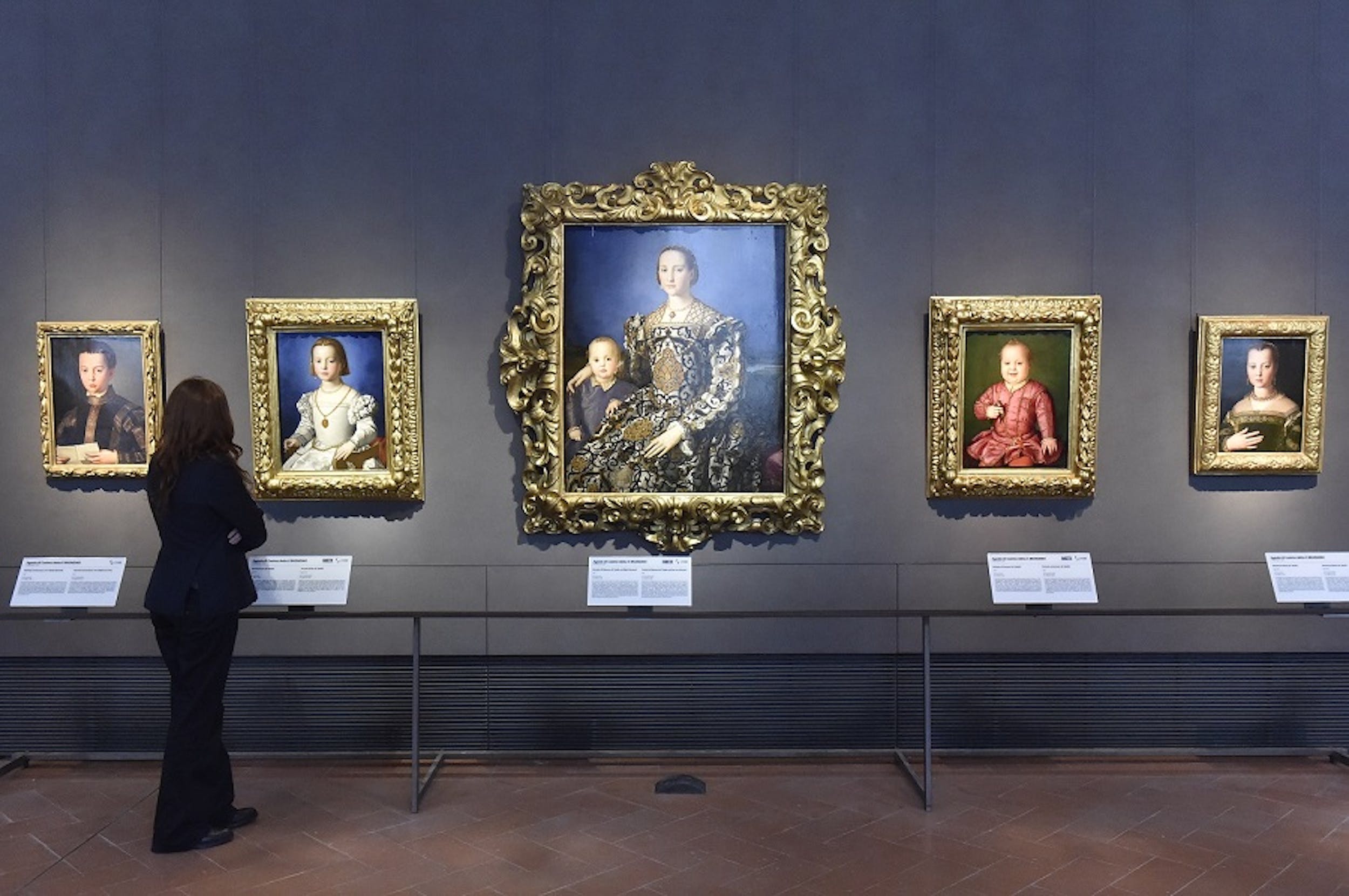 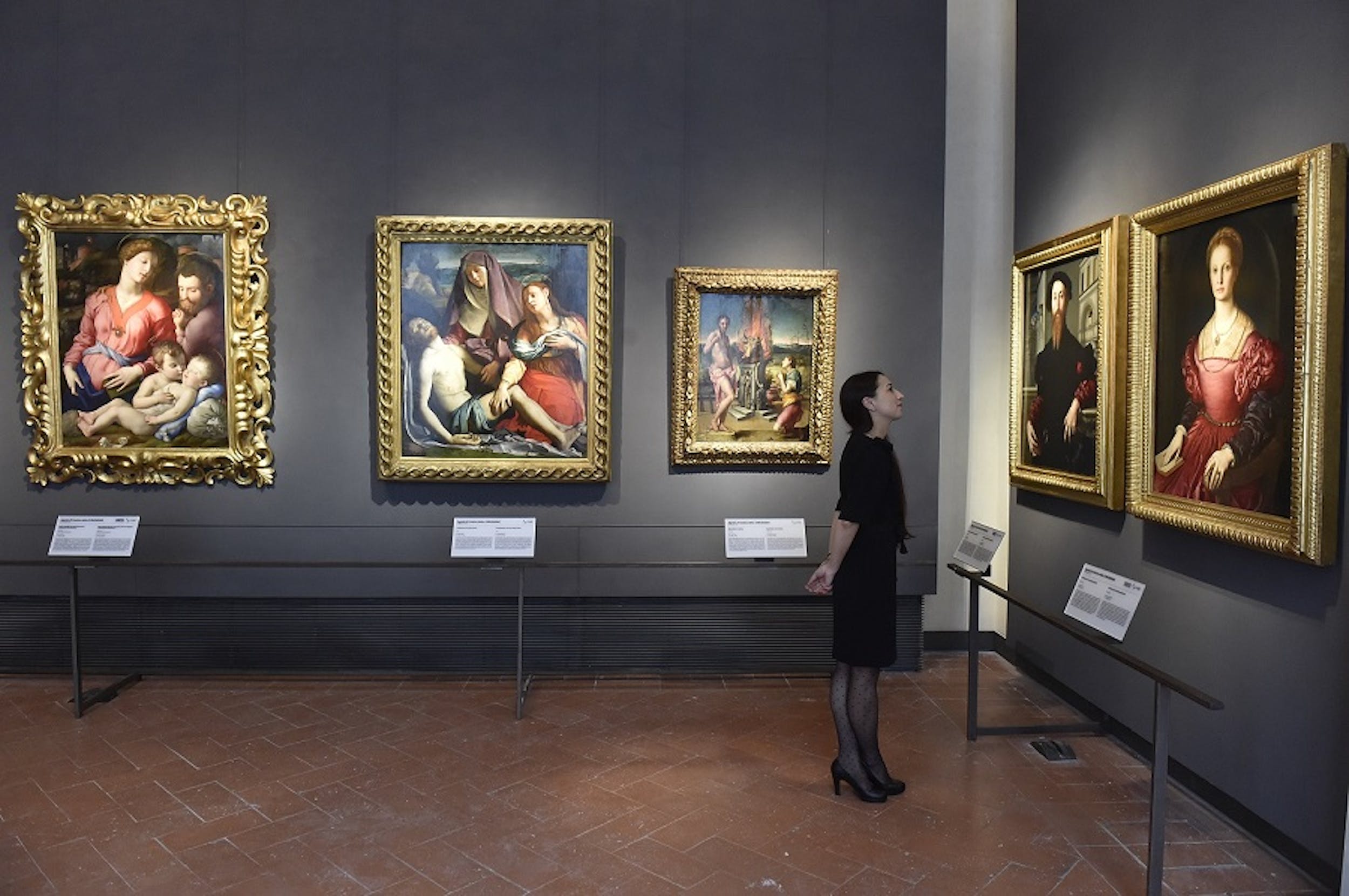 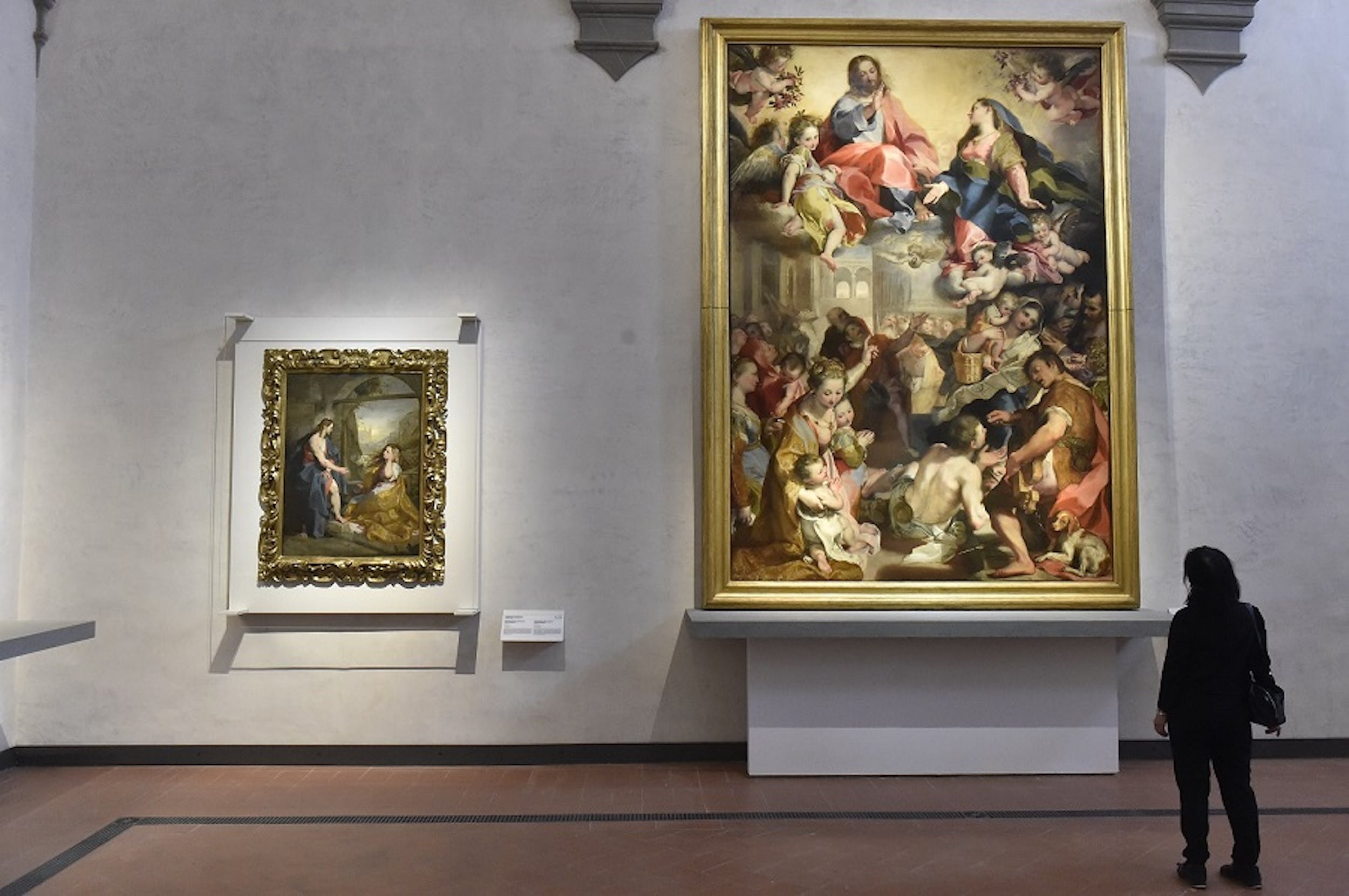