Origin, critical reception and history in the collection

A small canvas painted by Diego Velásquez during his visit in 1649-1651, now in the Prado Museum, is the oldest depiction of the sculpture (Schröder 2004, p. 396, fig. 88). In spite of the painter’s focus on the architectural setting and of the rapid strokes he uses to show the figure of the Cleopatra, the turn of the head and the position of the right arm are in any case shown with sufficient clarity to identify it with the “Milani Head”, i.e., with the 16th-century addition, now separate from the rest of the statue, but which we will go on to discuss. What is debated, however, is whether the Cleopatra used as a model for the marble replica made by Corneille van Clève for Versailles between 1684 and 1688 is the Vatican or the Medici model (Müller 1935, fig. 5). According to Laviosa, with agreement in more recent literature (Rausa 2000, p. 187), the copy is of the Cleopatra from Villa Medici, but, as indicated by Adrian Sthähli (2001, p. 383, note 11), some details, such as the fringe on the cloak, under the left hip of the woman - found only on the Vatican statue - would seem to point to the use of the Roman model, probably mediated by the bronze copy that Primaticcio made for Francesco I. If the rocky texture of the surface on which the Versailles statue is placed can actually be said to be the result of Primaticcio’s choice to add this to the bronze copy, then along with other details such as the sculptural effect and movement from the folds of the robe between the woman’s feet, there are actual affinities with what we can see on the Florence statue. We might even imagine that van Clève used a combination of ideas from the two Cleopatras on his version for Versaille, since he knew both well, thanks to a lengthy stay in Rome as a guest of the Académie de France. What is definitely based on the Roman copy is the Madrid gesso by Velásquez, from the period of his second visit to Italy (Harris 1981, p. 537). Mention should be made of the small engraving of the sculpture in the work Le statue di Firenze, published before December 1794 (Le statue di Firenze 1790-1794, II, tav. 31), which, due to the angle of the head and the draping over the right arm, demonstrates its depiction of the current head.

The dependence of the additions to the Florentine Ariadne according to the model offered by her Vatican sister offers an important post quem in terms of timeframe. The front part of the sandals on the statue now in the Uffizi is a perfect copy of the design we see on the statue in the Vatican, which was given these elements sometime between 1538 and 1540, in a drawing by Francisco de Hollanda, when the statue’s feet are shown in full for the first time. The addition of the head and right arm, the lower body and part of the left arm, the legs, from just below the hips and almost the whole rock on which Ariadne is lying, date back to between the 1540s and 1580s when the statue joined, probably with all additions in place, to the Medici collections. The Florentine restorations therefore, preserve details that in some cases were eliminated from the Vatican statue by Sibilla’s 18th-century interventions. This is probably the case for the rectangular drape of the himation on the front, over the left leg, a point where, on the Vatican statue, we see a semicircular drape due to restoration in the 18th century. Elsewhere, however, it is possible to see greater freedom compared to the model, such as the rendering of the filling on the left thigh or the way in which the folds of the robe drop between the feet, where the fabric takes on a volume and complexity we do not see on the Roman copy.

Important elements for the interpretation of the sculpture’s formal quality and its comparison with the Ariadne in the Vatican come from looking at the parts surviving from antiquity. Clelia Laviosa already pointed out how the Florentine copy offered important clues on the correct position of the body, which is more reclining and set back than on the Roman copy, as well as the nature of the terrain that only seems to be given a rocky appearance on the Florentine version (Laviosa 1958, p. 165). The great care reserved, on the Medici Ariadne, to the depiction of the folds of her chiton and himation has not escaped the attention of scholars. The definition is the same on the back, unlike on the Vatican statue (Wolf 2002, p. 91). Moreover, as rightly noted by C. M. Wolf, it is certain that the old portion of the Uffizi Ariadne’s torso features an accentuated quest for the colouristic aspects of the surfaces, created through the insistent pleating of the chiton and with the indication, in the way the himation drapes over the back of the figure, of smart folds.  Also worthy of note is the almost virtuoso workmanship of the drapes, with their undercuts that in some points, such as below the left breast, reach a depth of 5 cm. Overall, it seems difficult to get away from the impression of looking at a replica made with a care and attention that are difficult to see in the Roman copy and which lead us to regret the paucity of the ancient part preserved on the Gallery statue. Some particular features, such as the folds or marked pleating, could in fact be convincingly interpreted as clues to a lectio difficilior, suggesting, for the Florentine copy, the possibility of greater fidelity to the original, thought to be the work of Pergamon craftsmen from the second century B.C. (Romualdi 2004, pp. 189 s., nota 12 ) and shown, as well as the copy in the Vatican and the Prado (Schröder 2004, pp. 392-397, n. 187), by a third copy from Perge (Christine Özgan to be published). This greater adherence to the prototype may also be seen in the hair, styled in a way that is not exactly like the Vatican statue, as demonstrated by the two locks (not the single one of the Roman statue) which, falling over the chest, almost reach the left breast. It is the workmanship of these two locks of hair, separated by deep and continuous drilled grooves and featuring only a few, subtle incisions, seem to echo, rather convincingly, the sculptures of the Antonine age, as comparison with a woman’s head from the Hadrian baths of Aphrodisia which can be dated back to the central decades of the second century, would seem to suggest (Therkildsen 2012, p. 49, fig. 1). This timeframe, which fits well with the convincing comparisons made by Wolf for the execution of the drapes (2002, p. 92), does not even call into question the use of white Dokimeion marble, which was most popular and used, as is well known, in the heart of the second century B.C. (Pensabene 2013, p. 372) . 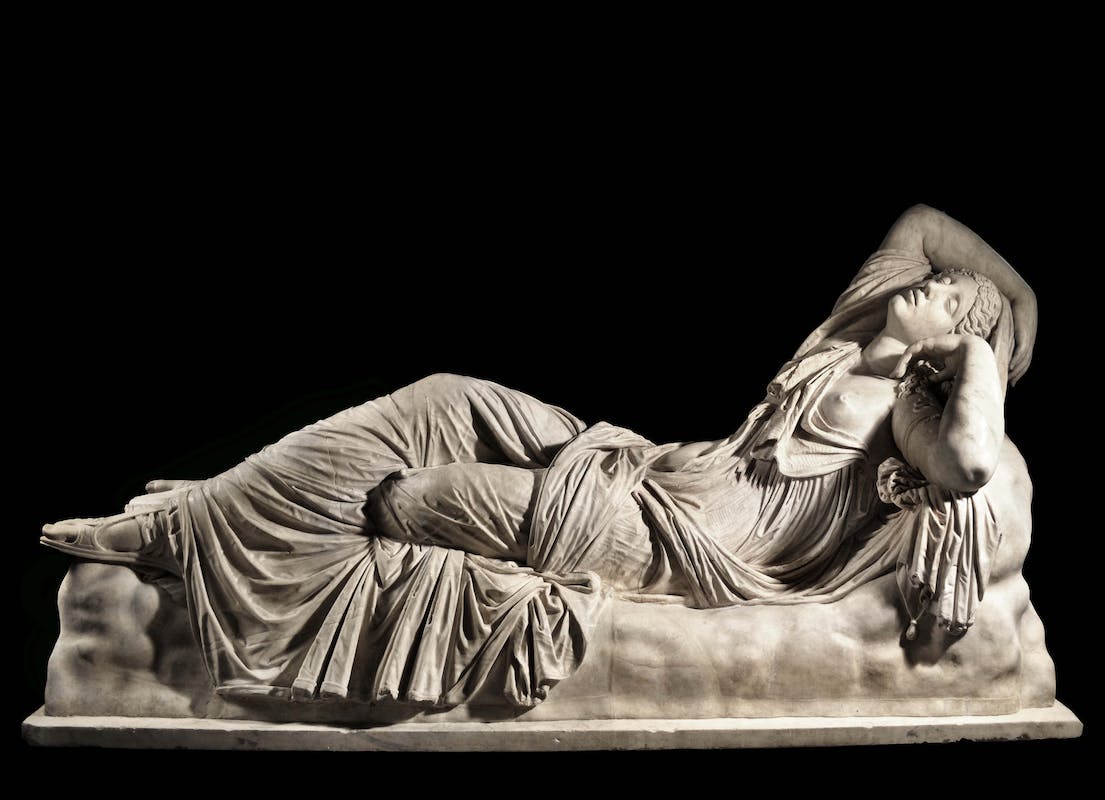 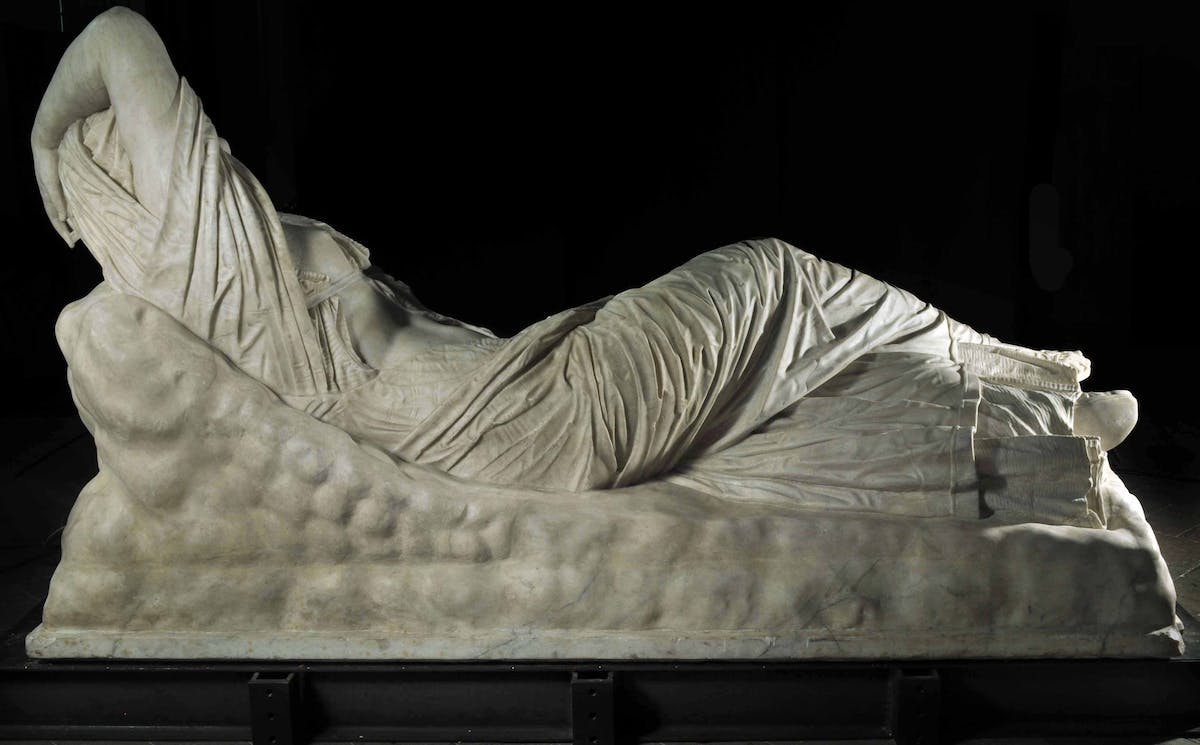 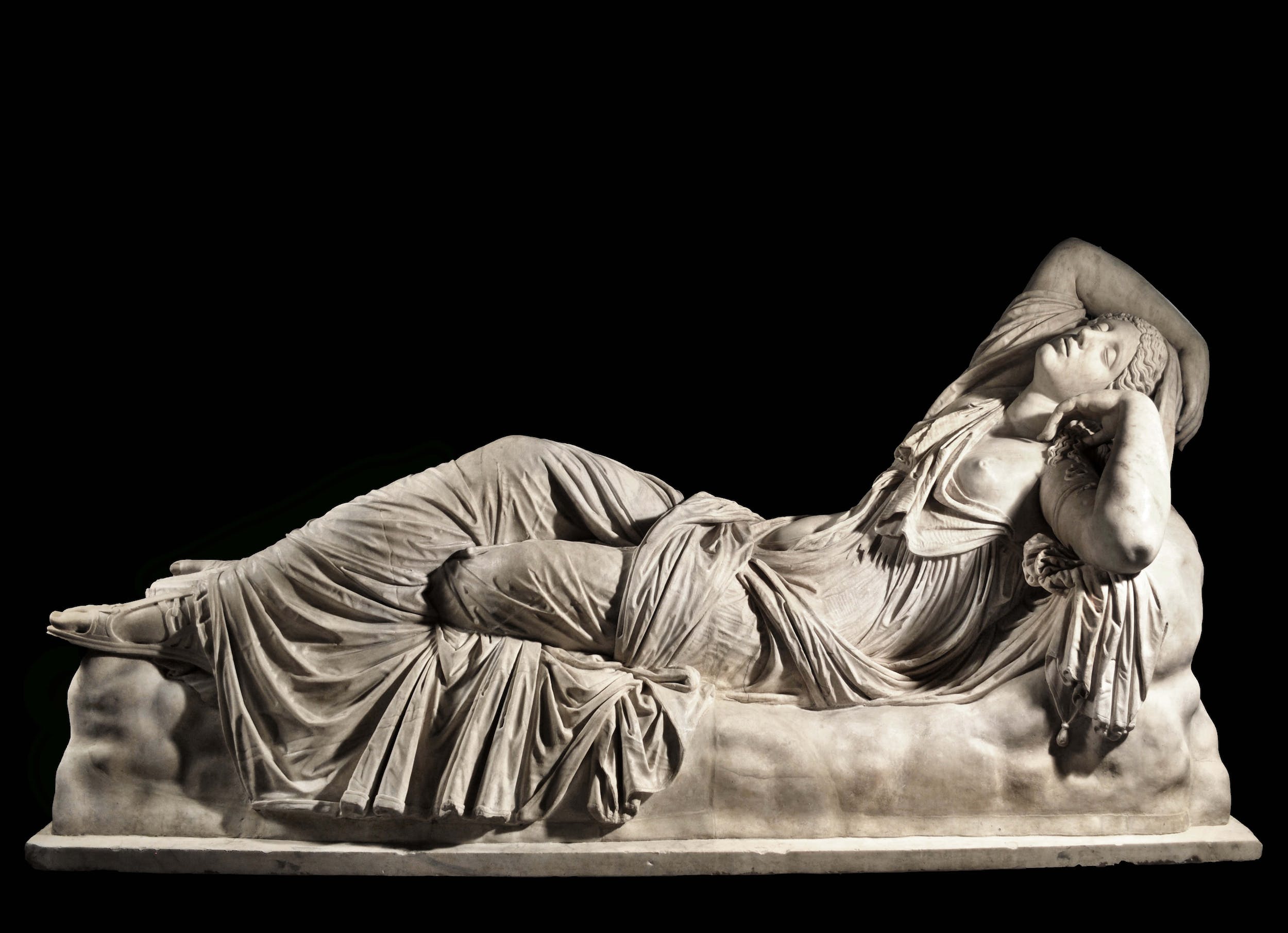 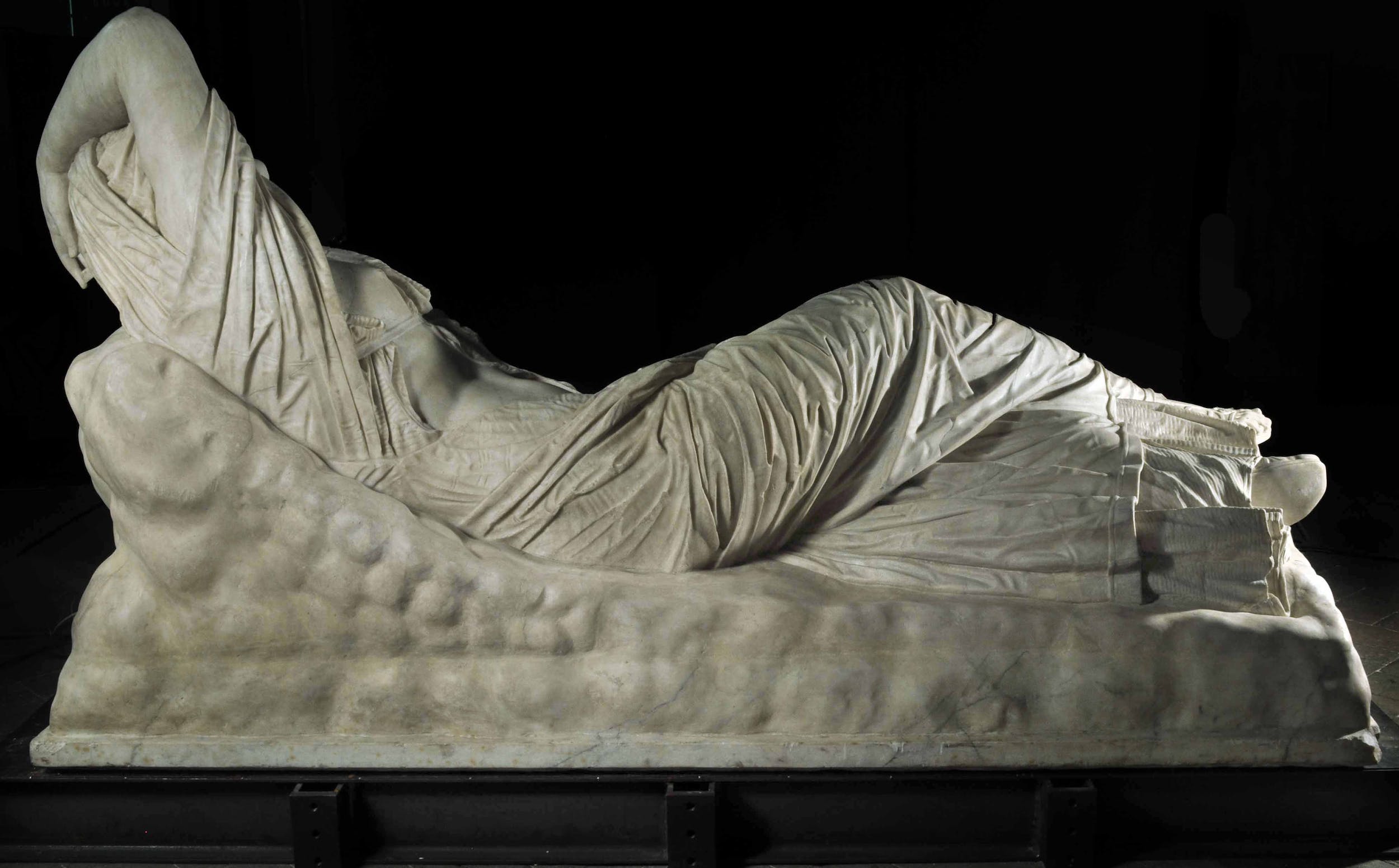