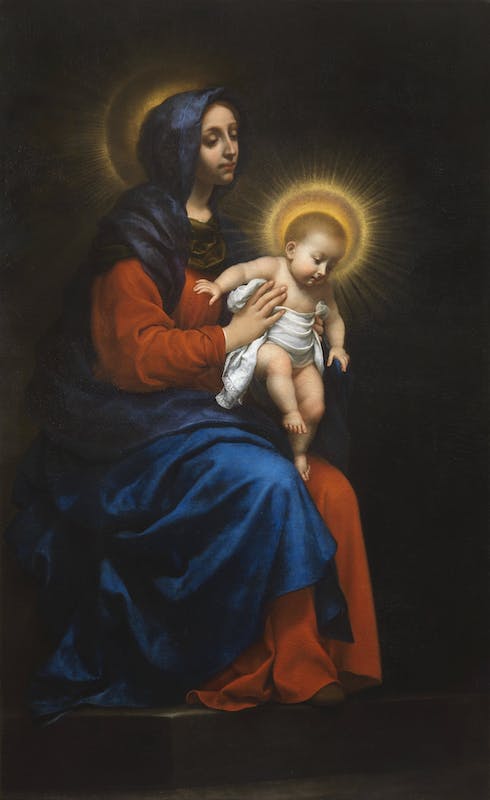 Madonna with Child (or Virgin presenting the Child)

The composition, of which today we only see the Virgin with the standing child, is actually part of a larger horizontal canvas, depicting the Adoration of the Magi. This was verified during the restoration carried out in 2015 on the occasion of the Carlo Dolci exhibition thanks to X-rays that revealed the presence of a male figure, identifiable as the wise man Melchior, kneeling on the right and in a direct line with the gaze of Mary and Jesus. This explains the diagonal placement of mother and son, a feature of a consolidated 17th-century iconographic model representing the arrival of the Wise Men at the stable and used by Dolci more than once, with variations on the format (London, National Gallery; Stamford, Burghley House Collection, Glasgow Kelvingrove Art Gallery). As in the other versions, the Palatine Gallery painting should have had a different background but was covered with a uniform brown layer in order to isolate the two main figures, like a sort of large “holy card”.

The original commissioner of this painting, which appeared at the end of the 17th century in the Vittoria della Rovere collection, the main admirer of Dolci’s painting, is not known. Here, Carlino, as he was fondly nicknamed due to his delicate constitution, undertook one of the most vivid works of his career. The excellent pictorial quality of the painting, the glazed, full-bodied layers, the clear, very detailed drawing that separates and defines the forms in the most minute detail, the careful choice of colour, the expensive lapis lazuli of the Virgin’s cloak, the reds of her dress, the use of gold powder to give the halos the very special effect of golden liquid light and, as Filippo Baldinucci’s words confirm, the proverbial ‘diligenza’ of the painter in representing ‘with marvellous artifice the smallest of things” so that “the hand of the observer has to serve as the eye to bear witness to the fact that they are painted and not real”.