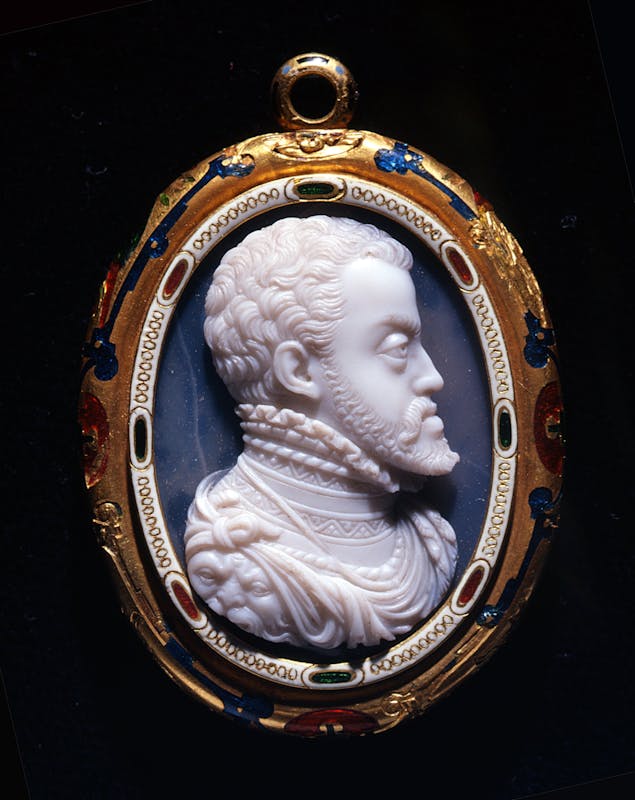 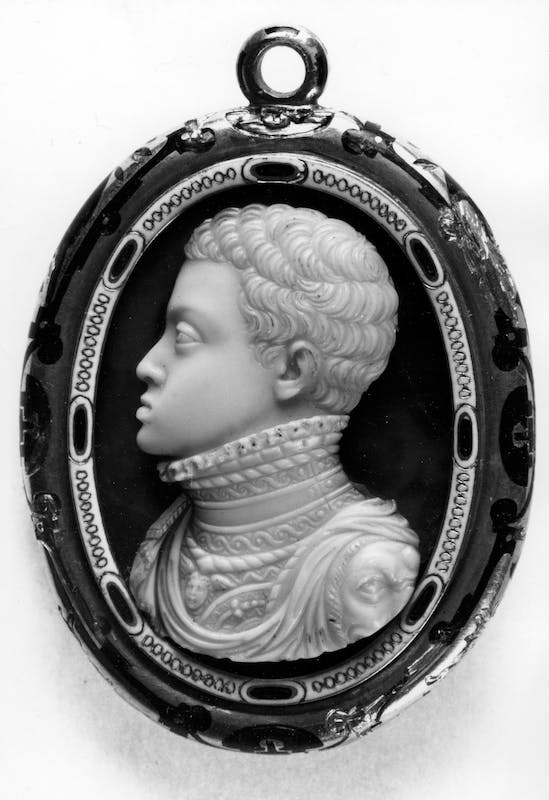 The back side of the pendant depicts the bearded bust of Philip II of Spain, shown in profile, facing the right and wearing a princely suit of parade armor, partly covered by a cloak knotted over his shoulder. On the front side is the youthful bust of Don Carlos, shown in profile, looking to the left, with an old-fashioned coat and a rich suit of armor, decorated on the shoulder with a lion protome. The portraits, made on two separate onyx plates separated by silver foil, have been inserted into an elaborate gold mount, decorated with geometric patterns, grotesque motifs and little animals, and enameled using the champlevé technique.

The pendant was part of a collection of gems belonging to Duchess Eleanor of Toledo, who purchased it in 1562, paying 40 scudos to the famous Milanese goldsmith and pietre dure engraver, Gasparo Miseroni.

Until the final decade of the 18th century, critics associated the work with the famous sculptor, medalist and engraver of pietre dure, Jacopo Nizzola da Trezzo, in the service of the Spanish court from 1559. The portrait of Philip II is very similar to the style of the artist and a medal depicting the sovereign in particular, made by Nizzola in 1555. However, the onyx profile of the beardless Don Carlos, the unfortunate oldest child of Philip II shows a notable similarity to the medal of Pompeo Leoni, son of the more famous sculptor, Leone Leoni. The two cameos date back to between 1555, the year in which the medal of Philip II was coined, and 1562, the year in which the Duchess Eleanor purchased the pendant.

The jewel was created for a precise celebratory purpose. The cameos are closely related to other examples to be found in different museums, possibly commissioned by Philip II and used by him as precious diplomatic gifts, as was customary in the 16th century.