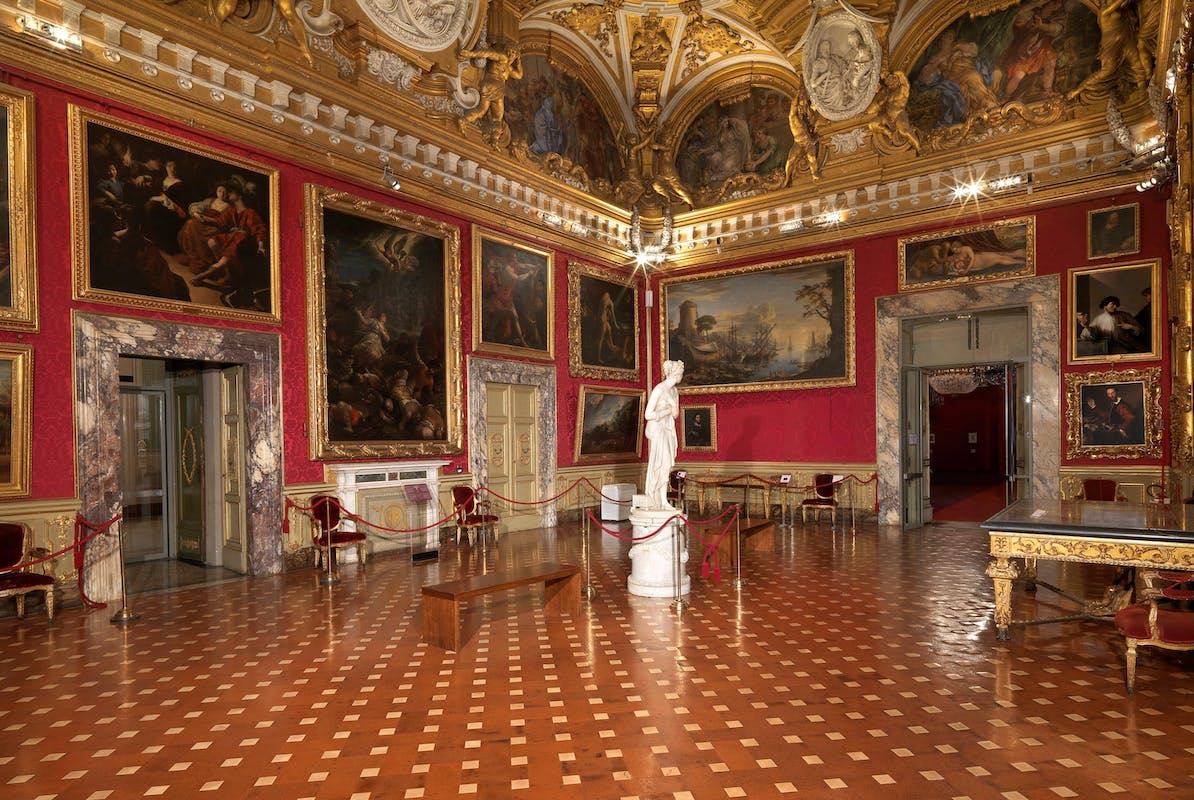 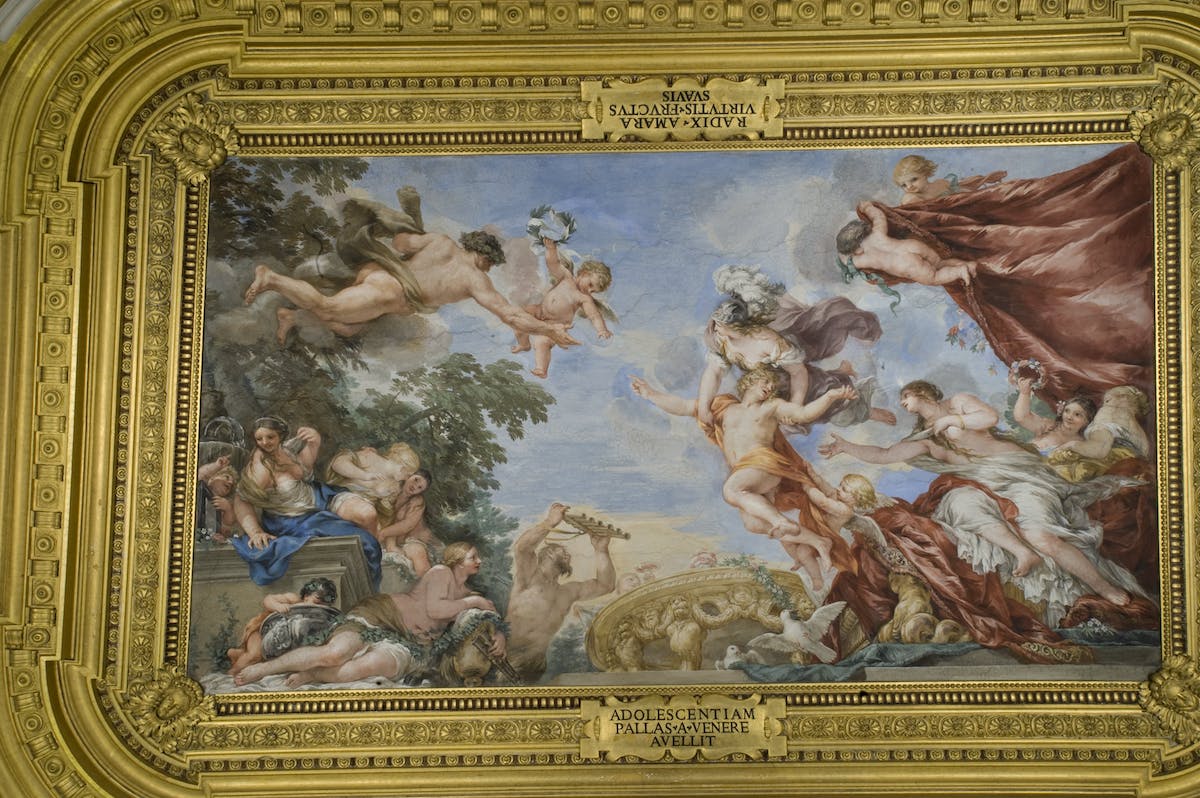 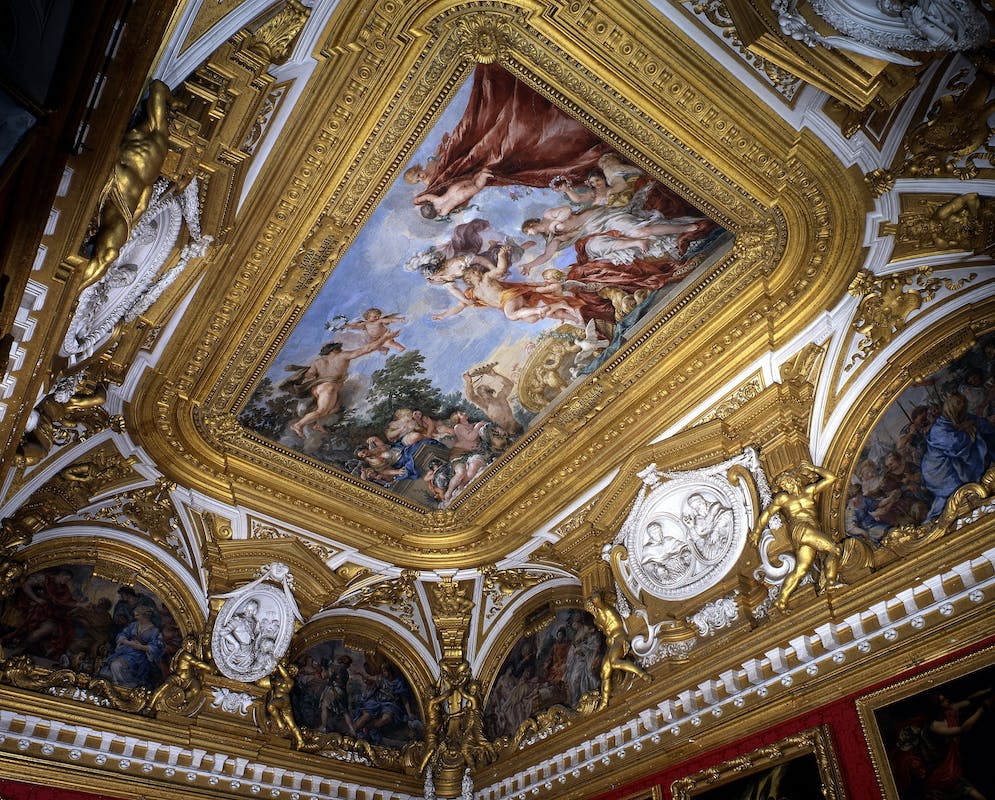 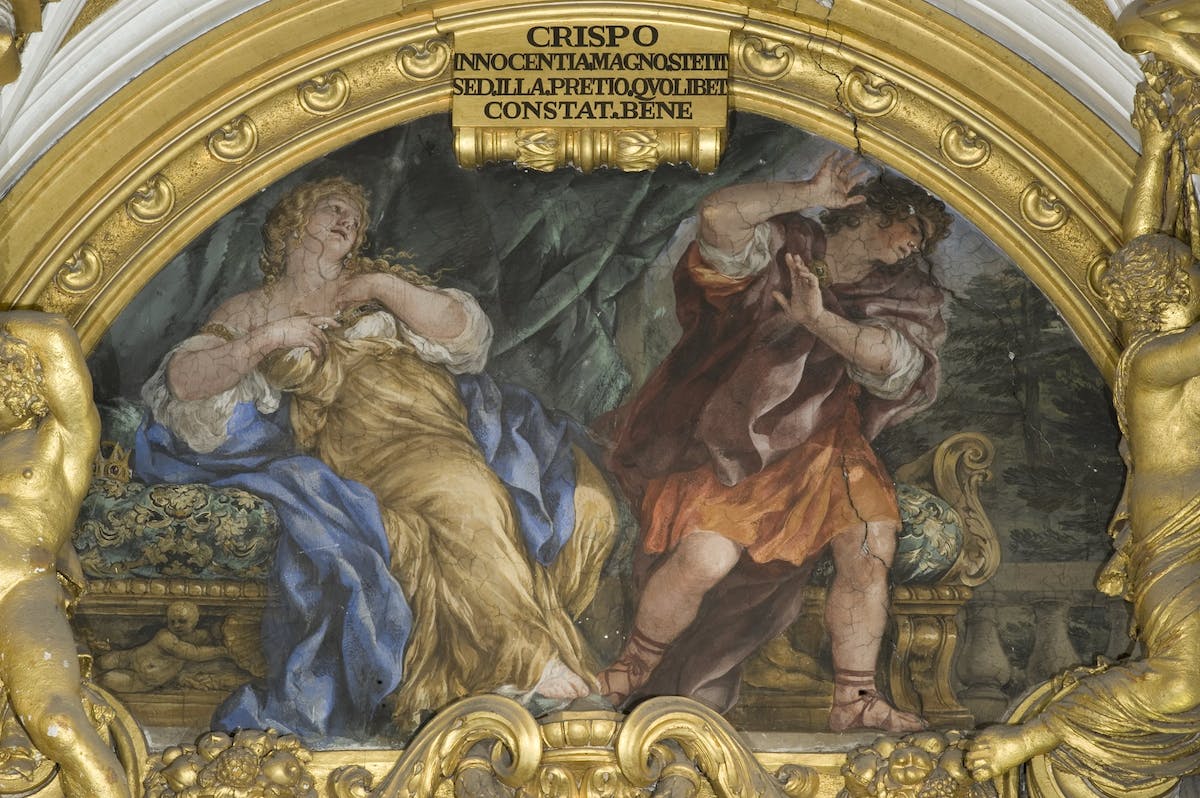 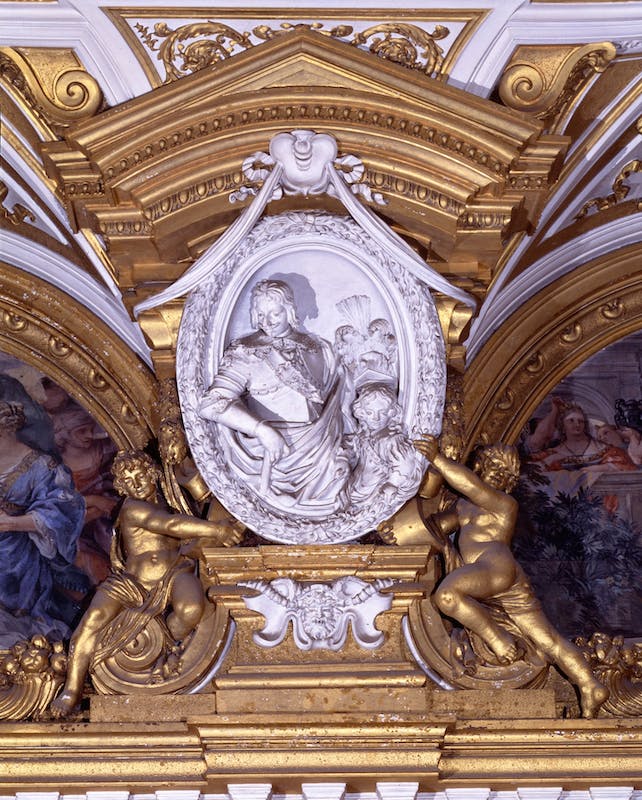 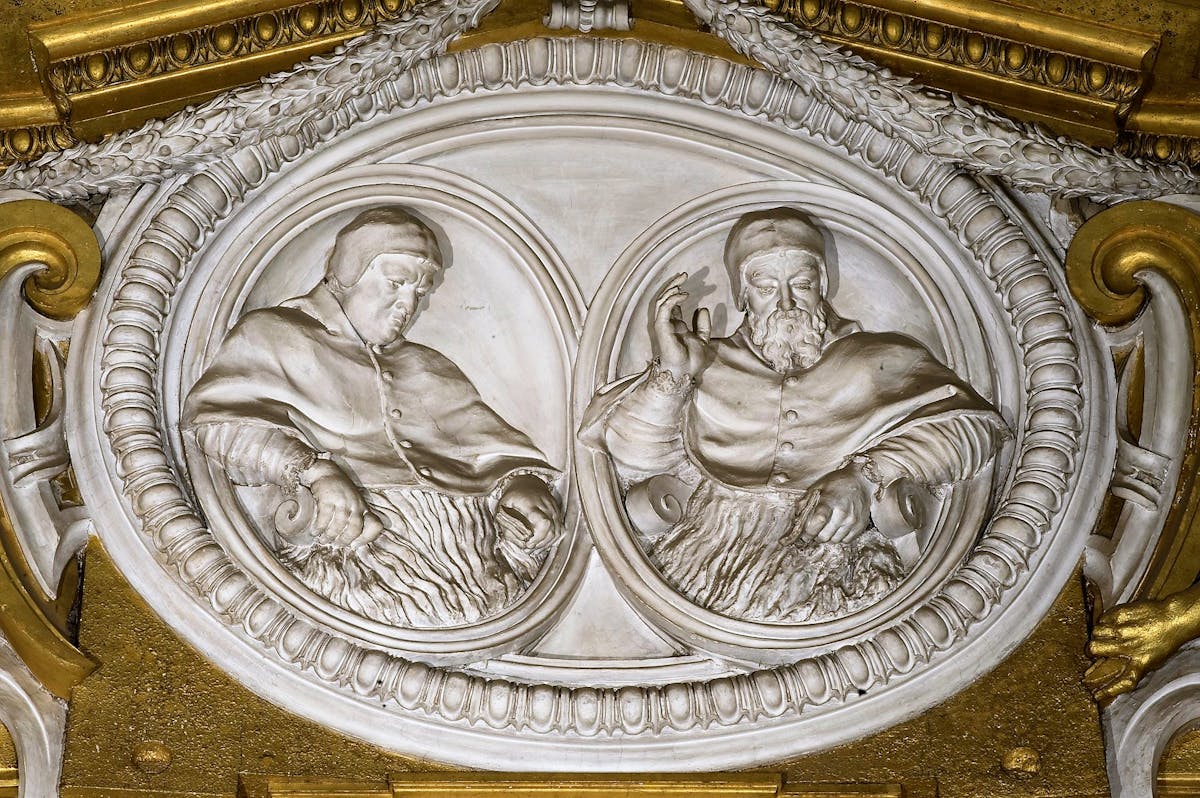 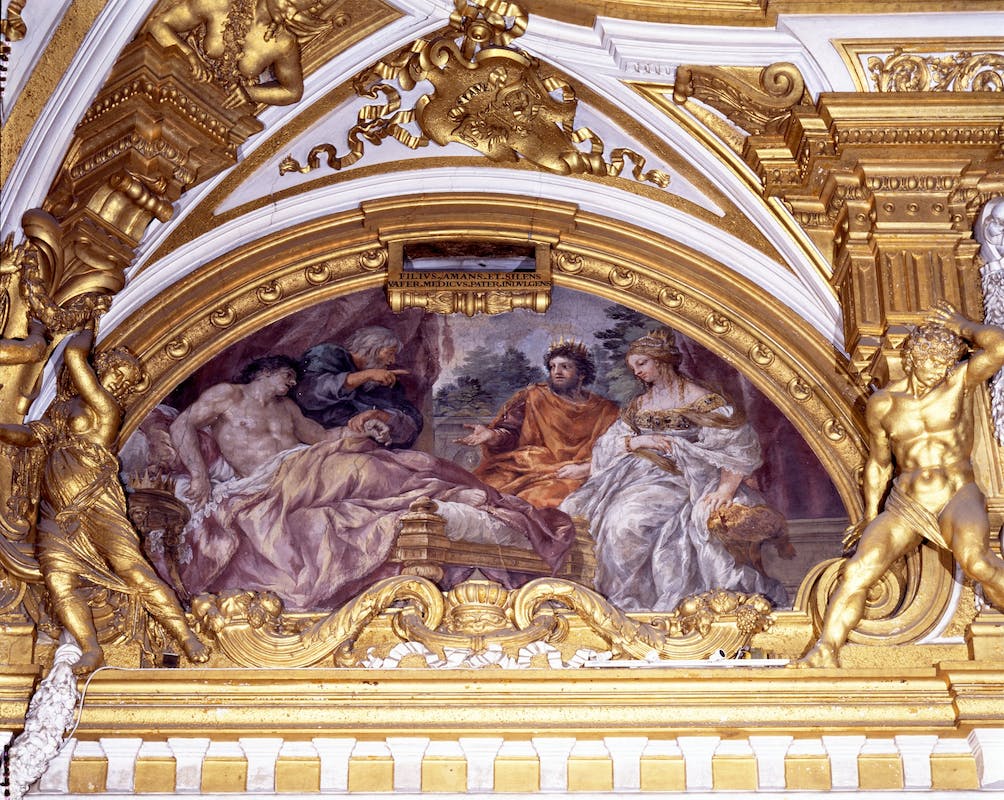 The Room of Venus starts the famous series of elegant rooms in the winter apartment on the first floor of Palazzo Pitti, the so-called Planetary Rooms. Pietro da Cortona was commissioned to decorate them with frescoes and stuccoes by Ferdinando II de’ Medici in 1641.

With this choice the grand duke shows that he has aligned himself with the new baroque decorative style, of which Pietro da Cortona proved to be the undisputed protagonist and innovator, the most capable of visually translating, with aerial and from below perspective that no other painter of the time would have been able to tackle, the Medici residence celebration programme. The decorative theme, proposed by Francesco Rondinelli, the grand duke’s librarian, was part of an iconographic programme aimed at exalting the figure of the prince and the process of preparing him to govern well, through the constant presence of all three key players in the rooms, that is, the gods of Olympus (Venus, Apollo, Mars, Jupiter and Saturn representing the Ptolemaic planets) to which the room is dedicated, the prince, and Hercules, a symbol of the virtues of the prince and protector of the Medici family.

In the centre of the ceiling of the Room of Venus, a young prince is torn from the arms of a goddess, a symbol of pleasure, and driven by Minerva toward Hercules, a symbol of virtue. In the eight lunettes, bearing explanatory inscriptions in Latin, illustrious characters of the ancient world are portrayed, and in the white stucco ovals there are portraits of the most important members of the grand duchy, as well as the two popes of the Medici family, Leo X and Clement VII. The Venus Room was the first of the series of Planetary Rooms to be painted by Pietro da Cortona on his return to Florence in 1641 and is the room where the change of spatial organization is felt less with respect to the renaissance construction below: the pattern of the lunettes, of the rib vaults and pendentives, although softened by the presence of the gilt stucco telamons and the white stucco medallions, follow a pattern that still reflects the order of the renaissance interior.

The room was the antechamber for people waiting to be admitted to the presence of the grand duke, and for this reason, above, behind the Story of Antiochus and Stratonice lunette, a small window was inserted between the stuccoes so that the sovereign was able to spy on and listen to what happened or was said in the room below.