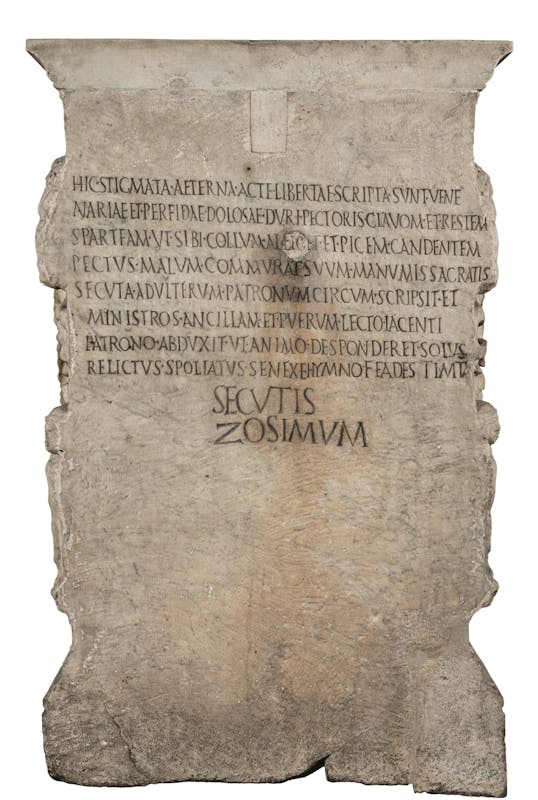 Altar in honor of Junia Procula. Back.

The back of the altar devoted to the little Junia Procula. Originally left unfinished as it was not intended to be seen, it hosts the most surprising part of this monument, the curse put on Junia Atte  by her husband, M. Junius Euphrosinus. She had been her husband’s slave, freed precisely in view of their marriage. The text of the curse is unique, and deserves to be reported here in full (CIL VI 20905):

"Let what is written stand as an everlasting curse on freedwoman Atte, evil and heartless poisoner and deceiver: let nails and a cordgrass rope bind her neck and boiling pitch burn her wicked breast. She was released without payment, not against her will, and left with her lover; she tricked her master and while he lay in bed, ill, she took away his maid and the young slave who assisted him, causing such pain that the old man, left alone, abandoned and robbed, lost heart. Let the same curse also fall on Imno and on those who followed Zosimus."

Euphrosinus therefore perceived their deceased daughter as the bearer to the Underworld of his words against his wife, in a variation of the practice by which curses were inscribed on lead tablets and buried in funerary settings. The faults attributed to Atte are particularly interesting, their gravity emphasized by the terrible death wished on her - hanging, combined with burning in boiling pitch-, and by the dimax that defines her husband’s condition solus / relictus spoliatus senex. She is accused of infidelity, aggravated by the fact that, in addition to violating the conjugal pact, she has also broken the bond that ties freedman to master, one of the foundations of Roman society. And she is also accused of poisoning - although it is not clear whether this refers to the magical practices with which she is thought to have seduced her husband, or to the filters with which she is believed to have made him sick-, thus completing the spectrum of accusations traditionally made against women in Rome.

Considering the monument as a whole, Junia Atte is therefore represented according to two opposite female models: the matronly ideal achieved in her role as bride and mother, as recounted in the main text, and the ultimate negative example, as traitor and poisoner, as she appears in the later inscription.