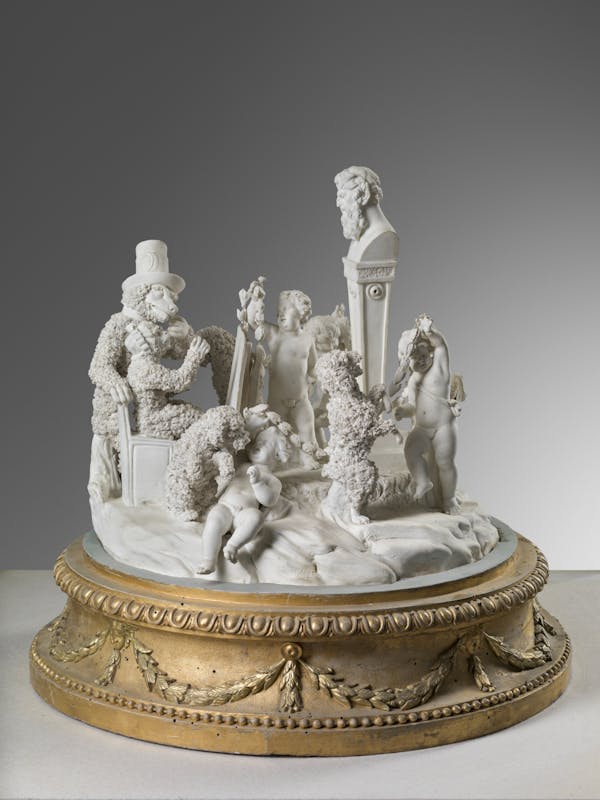 After the Naples Royal Porcelain Manufactory was moved by its founder Charles III of Spain from Capodimonte to Madrid, production of porcelain in the Kingdom of Naples started up again underhis son Ferdinand IV who, having become king in 1771, reintroduced it by opening a factory in Portici named Real Fabbrica Ferdinandea. The following year, the factory was transferred to the Royal Palace in Naples and inherited from its predecessor in Capodimonte the Neapolitan taste and magnificence of this fragile and vibrant material which, since its arrival in the west, had won over the Courts of Europe, becoming a status symbol for those who owned it.

One interesting creation of this manufactory is the striking, unusual group in biscuit (a kind of porcelain fired once at 1400°C), depicting a humanised bear wearing a top hat, who is busy giving a drawing lesson to a monkey wearing a pretty cap tied under its chin. The monkey is drawing a herm of the god Pan, surrounded by a garland of flowers held up by some putti who are playing with poodles; a scene that can be compared to a unique commemoration of the Processions of Bacchus also present in the paintings of Pompeii.

Although the sight of humanised animals might appear eccentric, these were actually very common in 18th century porcelain, even if not so much so in the Italian production. One example is the famous Monkey Band of the Meissen Manufactory, which portrayed an orchestra of monkeys dressed in tuxedos and evening gowns.

Our group may have been part of a luxurious centrepiece, like the one depicting the Bear Hunt conserved in the National Capodimonte Museum, also created by the Naples Royal Porcelain Manufactory in 1789, which originally hosted 114 biscuit porcelain figures.

The School of Bears definitely belonged to Maria Luisa of Spain, so we can assume that it arrived in the Palace of Palazzo Pitti during the period when she was Grand Duchess of Tuscany (1765-1790). The gilded wooden base is from the same period and reiterates the leaves of the garland held by the putti in its decorative motif. This type of base was used for compositions of particular prestige.