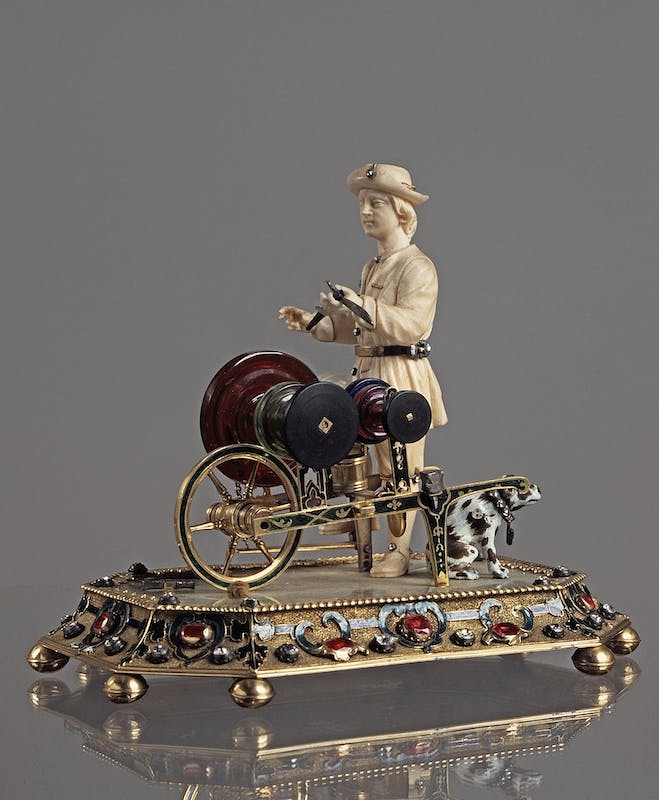 The carved ivory statuette, decorated with diamonds, depicts a knife sharpener, intent on sharpening a razor blade on grindstones in semiprecious stones and ebony mounted on a golden cart, partially enameled in green and hung with a small water basin and a scabbard, also in gold and enameled in green and blue. At the foot of the figure is a brown and white enameled dog, illuminated with a collar studded with diamonds.  The piece sits on a mirrored plate, on which there is a hammer, a pair of shears and some wadding. The octagonal base rests on eight flattened balls and is decorated with a rich frieze along the hollowed edge, studded with diamonds and rubies, set between stylized bows and leaves in green, blue and white enamel on a dotted background.

The work can be recognized as among the “galenterie gioiellati”, small items made in gold, stones and other precious materials described in the inventory of assets of Anna Maria Luisa de’ Medici’s estate, drawn up in 1742 The statuette was sent to Vienna by Count Emmanuel di Richecourt, trusted aide of the new Grand Duke of Tuscany, Francis I, Holy Roman Emperor, and was only returned to Italy after the treaty of Saint-Germain was signed at the end of World War One. Like other prestigious items belonging to Anna Maria Luisa, the Blade Sharpener joined her collection during the years she spent in Düsseldorf at the court belonging to her husband, Johann Wilhelm von der Pfalz-Neuburg, the Elector Palatine, a man of great influence due to his close ties with the Habsburg empire. Similar pieces to those in the treasury of the Grand Dukes are to be found in the Schatzkammer in Munich, in the Grünes Gewölbe in Dresden and in the Hermitage in Saint Petersburg.  The Florentine piece can also be compared with another example, owned by Princess Salimah Aga Khan, the gold parts of which have been identified as the work of the goldsmith Johann Heinrich Köhler, and dated to around 1710 -1720. This same master craftsman, jeweler to Augustus II of Poland, has also been credited with the mount for the Blade Sharpener belonging to the Electress of the Palatinate, perhaps linked to the fashion for “Wirtschaften” or taverns, costume pageants that were widespread through Saxony and Prussia in the late 17th century. It has been suggested that the figure from the treasury of the Grand Dukes had been part of a group of statuettes commissioned from different and considerably skilled artists in 1690 by Sophia Charlotte of Hanover, wife of Frederick of Brandenburg, future king of Prussia, as gifts for her guests on the occasion of the “Scherenschleifer-Wirtschaft”, a court pageant dedicated entirely to the figure of the blade sharpener.