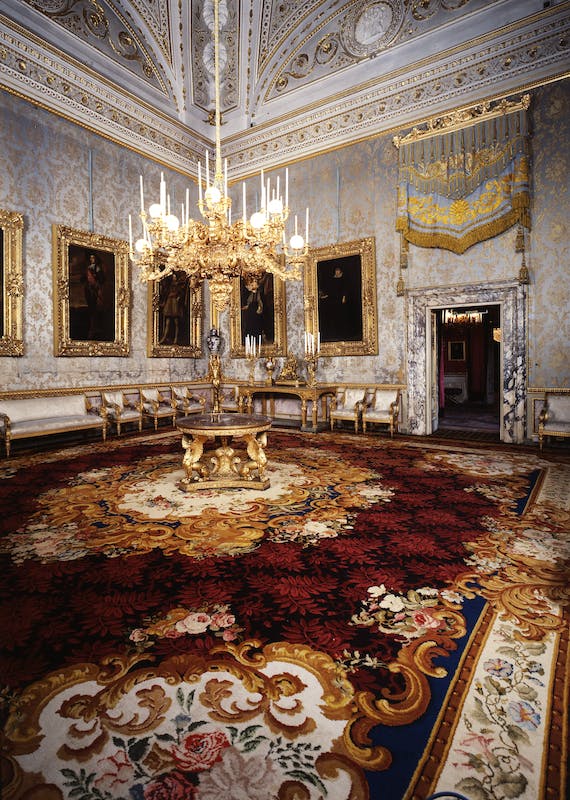 Like the Green Room and the Throne Room, this room too was renewed between 1854 and 1855 when this suite was known as the new “Quartiere delle Stoffe”.

After the addition of new wallpaper, in this case in a shade of blue, the room was also given a carpet made by French weavers in Tournai, which stands out for the neo-baroque decorative style, updated to the fashions of Paris and London in the mid-19th century.

It can be deduced from the inventory of 1911, taken as a reference for reconstructing the furnishings in the Apartment, that everything in this room was lost or transferred to institutional premises in Rome, with the exception of the small round table with a pietre dure top on a base in porphyry, and the four candle holders.  Taking into account the fact that the paintings in this room were already in this wing of the palace at the time of Grand Prince Ferdinand, who died in 1713, the current appearance of the room pays homage to some members of the Medici family or those who were joined to it by marriage (except Cardinal Camillo Francesco Maria Pamphili), and who had spent time in these spaces during the course of their lives. The walls therefore have ten of a series of twelve portraits painted between 1621 and 1645 by court painter Justus Sustermans, all identical in size and given new frames in the 1720s on the wishes of Grand Duke Cosimo III, together with a full-length portrait of Christina of Lorraine, her daughter Claudia and husband Leopold of Austria, Cosimo II’s children, Francesco and Mattias, painted a few years later, Grand Duke Ferdinand II, and Cardinal Carlo de’ Medici.  The large chandelier carved by Vittorio Crosten, and the oldest still in the palace, also dates back to the 17th century, while the white stucco and gold ceiling dates back to the period of Peter Leopold of Lorraine, as does the “eagle” fireplace by Francis Harwood, an Englishman who moved to Florence, where he ended his days in 1783, who worked as a portrait painter and copyist of Roman antiquities for travelers on the Grand Tour, but employed by the Grand Duke to restore the sculptures in the palace and the Boboli Gardens.