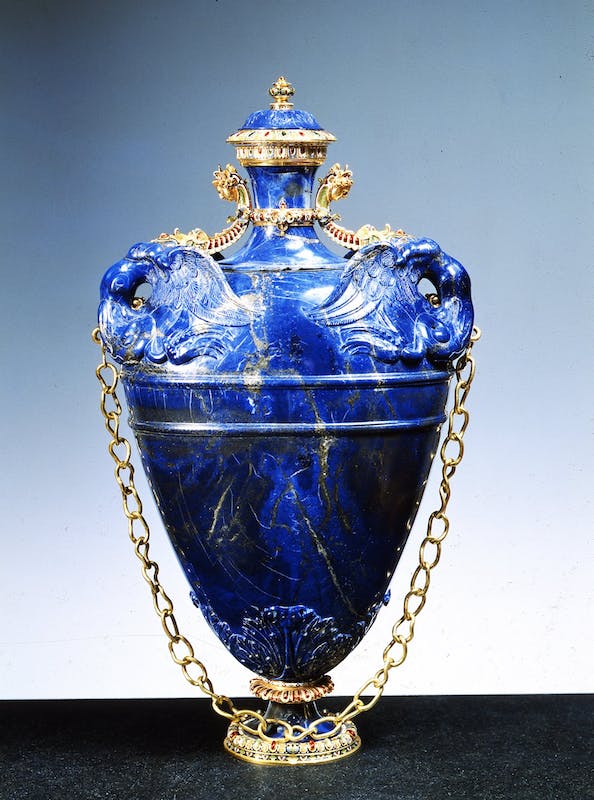 The vase, a masterpiece from the workshops of Casino di San Marco, established by Francesco I de’ Medici in the latter part of the 16th century, consists of five pieces of lapis lazuli of exceptional quality that form the foot, body, neck (divided into two) and lid. On the base, the vase is dated “1583”, engraved beside Francesco’s initials, “FM”, and the Medici coat of arms, indicating completion of the stone section – likely the work of skilled Milanese carvers, Gian Ambrogio and Gian Stefano Caroni, called to Florence in 1572. The carvers worked from designs by Bernardo Buontalenti, as can be seen from the drawing in the Collection of Prints and Drawings in the Uffizi (inv. no. 694 Orn), which contains the main idea behind the item, i.e. two handles formed by two sphinxes with wings and fishtails to be made in relief, however, deciding to make a few changes, the carvers created leaves from which the body of the vase emerges in relief, while the decoration drawn by Buontalenti and intended for the band of the body is absent.

The golden reflections of the lapis lazuli, created using pyrite engravings, may have inspired the elaborate mount in enameled gold that completes the figures of the two winged sphinxes, with long necks and heads in enameled gold which, like the bands on the foot and lid, are the work of the Dutch goldsmith Jacques Bylivelt, creator of the grand ducal crown, who delivered the finished item on 16 March 1584.

The vase was already listed in the inventory of the Tribuna degli Uffizi in 1589 and in 1753, it is described with its mount intact, although various precious parts were subsequently stolen by the Galleries’ first caretaker, Giuseppe Bianchi, involving damages to many precious items from the Treasury, before being discovered in 1768.