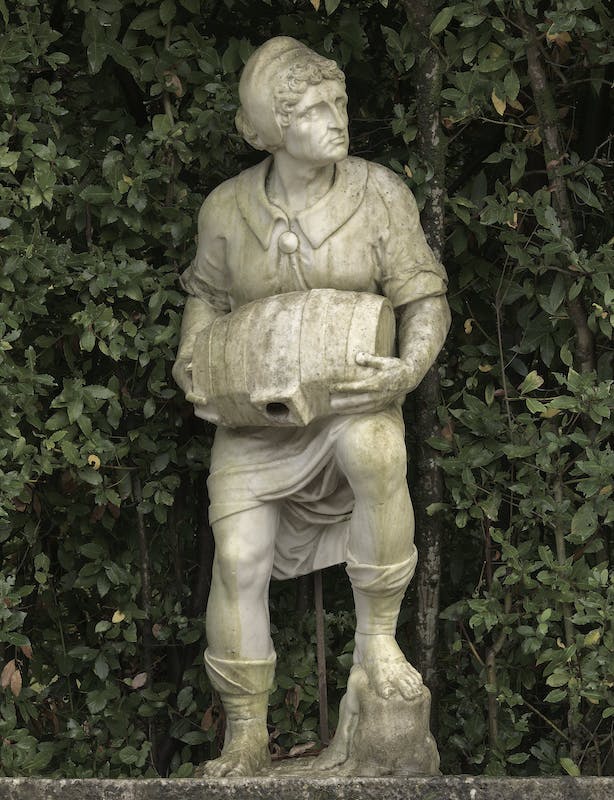 The Peasant and his Barrel

Commissioned by Eleonora da Toledo from Florentine sculptor Baccio Bandinelli, this piece was actually designed by Bandinelli, who provided the design, but it was made by his pupil Giovanni Fancelli, also known as Nanni di Stocco, who was working with his master on the decoration of the nearby Grotta di Madama. The “Peasant and his Barrel”, sculpted before 1557, was the start of a successful tradition of statues of popular subjects that continue to decorate the paths through the gardens. Mentioned by Giorgio Vasari in his Life of Bandinelli, the statue was transferred to the Medici villa of Pratolino in the 17th century. It was brought back to Boboli Gardens in 1773.

The statue, originally in the fishpond that took its name, the “Vivaio del Villano” (peasant's pond) used to serve as a fountain. The subject, dressed in the clothes of the time, is shown in an everyday activitiy, pouring wine from the typical wood container used to store it: a small cask, or caratello, a term that comes from the mediaeval Latin term carratum (small wooden pot in the shape of a barrel, used to transport wine on carts). Figurative sources for this work, in the style of 16th-century sculpture used to decorate gardens, would seem to be traceable to the statues of ancient Greece and, from a period closer to that of the artist, the prints of Albrecht Dürer.

The recently-restored sculpture was replaced by a copy for conservation reasons which meant the statue could no longer be kept outside.