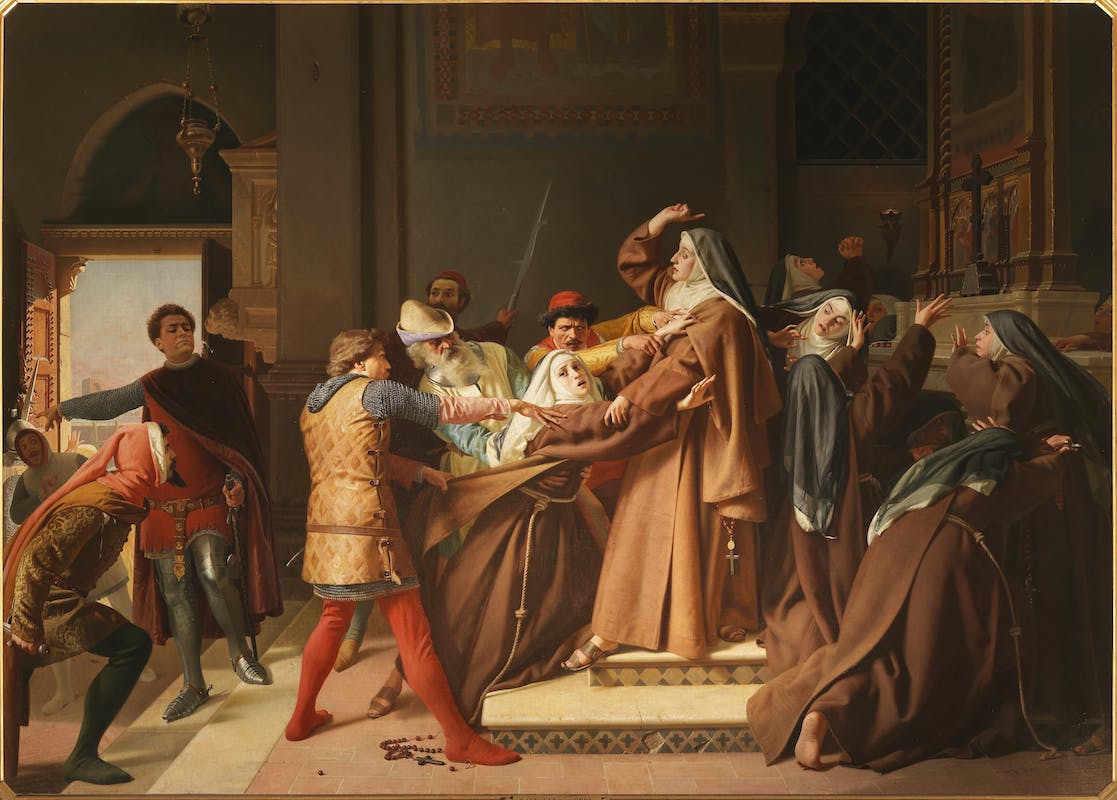 Piccarda Donati, kidnapped from the convent of Santa Chiara as ordered by her brother, Corso

This painting, which portrays a story told by Dante, is the tragic tale of Piccarda, an unfortunate soul kidnapped from the convent where she lived with her fellow nuns, by the order of her brother, Corso Donati, who had decided to force her, against her will, into marriage with his fellow socialite, the wealthy Rossellino della Tosa.  With a sensitivity very similar to the 19th century melodramas inspired by the same episode, Raffaello Sorbi depicts the climactic moment of the story, when the evil Corso disrespectfully breaks into the convent and stands, holding the door wide open, with his hand on his sword, ready for action, watching his henchmen grab his sister with brutal violence, as they literally tear her from the arms of the Mother Superior. The latter, whose arm is raised, points at the crucifix behind her, in a gesture of grave admonition, almost anticipating the punishment later to befall the evil perpetrator of that sacrilegious act. The theatrical presentation of the episode is evident in the clever use of light, which illuminates the central part and focus of the composition, where the soldiers attacking the protagonist are crowded on the steps, and also the group of fleeing nuns, emphasising their terrified expressions and distressed gestures.   In this way, Sorbi showed that he was abreast with the latest history painting criteria, authoritatively dictated by Giuseppe Mazzini, who recommended that artists should avoid focusing on one central element in the composition, but instead accentuate the composition as a whole, spreading the actions and details out in all directions. Accordingly, in this painting, the turmoil caused by the bunch of armed men bursting into the convent is expressed through a number of aspects and even the tiniest details acquire a meaning within the parsimony of the story. One example is the broken rosary lying on the floor, almost trodden on by one of the soldiers, which indicates the sense of desecration that dominates the entire scene destined to culminate - according to the sources - in the death of Piccarda.

The canvas, commissioned by Victor Emmanuel in 1863 and completed by the artist three years later, faithfully mirrors the canons of traditional romantic history painting, especially in its intent to convey morally edifying subjects with a strong element of pathos, such as the theme of the virtuous woman physically forced into an unfair relationship, fuelling the formation of a modern national conscience.   The persistent bond with romantic tradition in an age in which modern taste already coincided with the painting of the Macchiaioli, could not be appreciated by critics such as Camillo Boito and Telemaco Signorini.  The latter was harsh in his criticism of the painting, which he said did not reflect the style of a promising young artist, but rather that of an “old master losing his touch”.

And yet when the painter, who had studied under Antonio Ciseri and is still largely unknown today, had turned eighteen, he had won the three-yearly competition held in 1861 by the Academy of Fine Arts in Florence, presenting to the public the subsequent episode to this one, inspired by the same theme, and namely Corso Donati wounded by the Catalans at the Convent of San Salvi and carried to the Badia by the monks of that convent where he dies in their care. On that occasion too he had used the same historical sources, from Dante to Landino, which had inspired the tragic episode featuring Piccarda.

Non per foco ma per divin’arte

Dantean echoes from the Uffizi Galleries