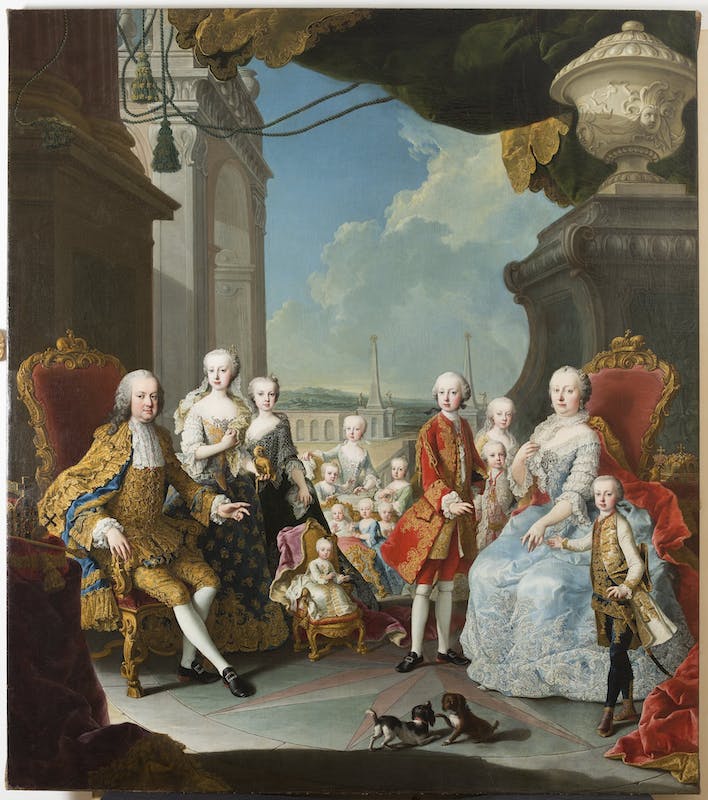 Portrait of Maria Theresa of Habsburg, Francis I, Holy Roman Emperor, and their thirteen children

There are three versions of this painting by Martin van Meytens, official portrait artist for the Habsburg-Lorraine dynasty. They can be dated back to 1754 and were completed at about a year from one another. The painting on show in the Pitti Palace is the last one and shows the entire family, including the youngest, Maximilian, while the first, which is kept in Vienna in Schönbrunn Palace, shows only eleven children, without Marie Antoinette, who is in the middle painting, which belongs to the collection at Versailles.

The three canvases are all similar, with the only difference being the growing number of children and the small changes made necessary by a minimum of resemblance required of a portrait that was first and foremost to transmit the impeccable, glossy image of one of Europe’s most important dynasties, responsible its political fates.  The arrangement of the two heads of the family, seated on thrones, is identical, as is the central opening, which frames a view from the entrance to Schönbrunn, with two obelisks topped by the imperial eagles, and even the presence of “two dogs playing” as listed in the Florentine inventories, a detail that loses all idea of spontaneity, as it is repeated over the years.

The portrait came to Florence with Peter Leopold, shown standing at the far right, when he came from Vienna as the young successor of his father, Francis Stephen, the first Grand Duke of the Habsburg-Lorraine dynasty, who began their rule over Florence in 1737. Unlike Francis, who with his more prestigious title of Holy Roman Emperor, left the fates of the Grand Duchy to his regents, Peter Leopold of Lorraine ruled until 1790, with commitment and continuity, as well as with an enlightened spirit of reform. However, the merit of the painting is not just in its iconography, but also in the excellent quality of the workmanship, enhanced by the splendid carved and gilded frame by Giovan Battista Dolci and Franceso Ristori, among the best craftsmen in Florence at the time and also responsible for other decorative elements in the palace